Last week we brought you a sneak peek at Campagnolo’s new Super Record RS groupset and now we can flesh out the details because Campag have issued official details. The main changes amount to a revised chainring and front derailleur to improve front shifting performance and reliability, including a switch from carbon to an alloy front derailleur cage. The new groupset will be offered in limited quantities and for a limited time, and will cost the same as regular Super Record. 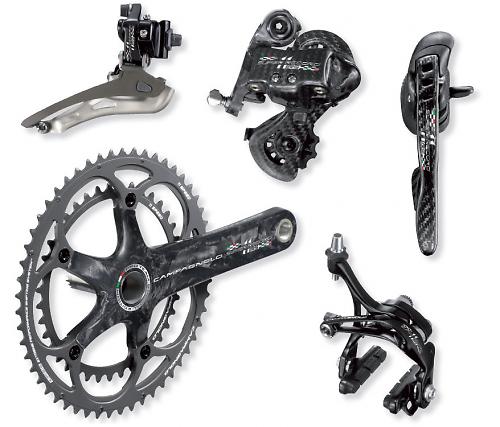 The RS groupset is apparently the result of the Italian company acting on feedback from the many professional teams and athletes riding its products, some still preferring a mechanical groupset over its electronic EPS offering.

Campag (even Campagnolo refers to itself as 'Campy' but we're not going down without a fight) says it set out to “increase the performance and reliability in extreme conditions” with this new groupset, and the key area for development has been front shifting. We’ve seen professional teams switching to cheaper alloy groupset front derailleurs in the past, as they’re less prone to flex than the very light carbon fibre or titanium front derailleurs typically found in top-end groupsets.

Campagnolo admits it wasn’t easy improving a product it feels is already approaching the pinnacle of mechanical shifting. It trialled several prototypes that were tested both in the lab and also at WorldTour races. Those development samples were badged up as regular Super Record but with ‘SC-14’ (‘squadre corsa 2014’, meaning 'racing teams 2014') stamped discretely on the back of the front mech and chainrings to help the team mechanics with identification... which is how they managed to keep it such a secret until very recently.

The main changes are in the chainring and front derailleur which have been made stiffer to improve shifting performance. The front mech has an alloy cage, taking a weight penalty over the carbon of the Super Record groupset to increase stiffness. A stiffer front mech is more accurate and reliable when shifting, especially in the heat of a race. One of the biggest improvements offered by electronic groupsets is the quality of the front shifting, and this will likely have contributed to Campagnolo taking a closer look at its mechanical groupset.

The rest of the groupset is unchanged. Campagnolo has added the new RS logo along with the tricolore to the key components. The chainset will be available in three options, 53/39, 52/36 and 50/34.

Campagnolo hasn’t issued any weight or availability information yet, but has told us the new groupset will cost the same as regular Super Record, which costs £2,176.99. So it's really an option rather than a entire new teir in their range.