Subscribe
Back to news
news
Art and design
Transport
Urban 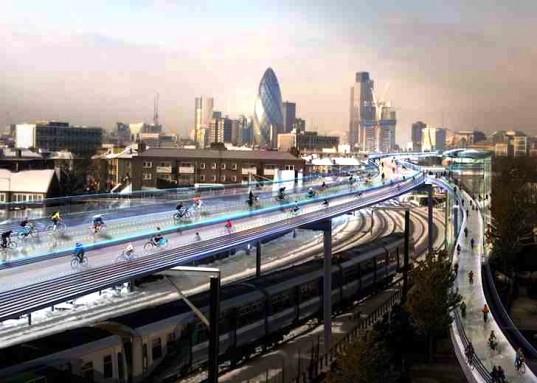 Mayor of London Boris Johnson has poured cold water on the development of a so-called ‘Sky Cycle’ network of aerial cycle routes running above railway lines in the capital, describing the idea as “fantastically expensive” and outlining other measures he believes should take priority in improving the safety of cyclists.

The idea, first floated in the summer of 2012, has come under the spotlight again over the past week or so after architectural practice Foster + Partners revealed its plans for the concept, widely reported in the media both in the UK and abroad.

The plans from Lord Foster's firm comprised a 220km network including 10 main routes which it said could handle 12,000 cyclists an hour, with the first proposed phase alone, from east London to Liverpool Street, costing an estimated £220 million.

Critics say that the proposals wouldn’t actually take cyclists, who would have to pay to access the network, where they want, pointing out that shops and other services are at ground level, and said the money would be better spent on making much-needed improvements to other infrastructure.

On his regular Ask Boris radio phone-in show on London radio station LBC this morning, Mr Johnson was quizzed by one caller, Richard from Streatham, “about the proposed cycle route in the sky and if there was really any truth in that, and if there was, how much it’s likely to cost?”

Mr Johnson said, “I don’t want to disappoint people too much on this,” and confirmed the plans had been presented to him, likening them to the Matchbox  race tracks he had played with as a child (now sold under the Hot Wheels brand), adding “that was the kind of idea, running in great loops across the city.”

It was Mr Johnson himself who first revealed in August 2012 that discussions regarding the concept had been held with Network Rail, with his spokesman telling The Times: “The Mayor is committed to leading a cycle revolution in London.

“The use of railway land or elevated cycleways to provide fast and direct cycling routes around the capital is an exciting idea that his team are looking into.”

At the time, a spokesman for the London Cycling Campaign said: “While we’re fascinated by Boris Johnson’s plans to put cycle routes along London’s working railways and would love to know how far his negotiations have got with Network Rail, we’d much rather hear the mayor say he’s prepared to build high-quality cycling facilities on the streets that Londoners use every day.”

The following month, Sam Martin and Oli Clark of landscape the firm Exterior Architecture, who had originally presented their scheme for SkyCycle to Mr Johnson, were due to meet with Network Rail to discuss the proposals further.

The scheme seemed to have been shelved until Foster + Partners revealed its own SkyCycle plans in late December, but Mr Johnson’s latest comments appear to signal that there is little chance of it ever happening.