As important as discovery of fire, says inventor
by John Stevenson

This might be the ultimate East London hipster accessory: a coffee grinder powered by a fixed-wheel bike. But it might also be a very deadpan spoof. The Hoxtonite collision of cycling, coffee and beards has got so silly we’re struggling to tell. You decide.

According to its website, Gear Grinder mounts on the left seatstay of your singlespeed, is driven by the fixed sprocket on a flip-flop hub and can grind up to 20g of coffee.

It’s the brainchild of Dan Hill and Dave Buonaguidi, a couple of beardie fellas from London ad agency Karmarama who say that it “allows cycle loving coffee aficionados to grind their morning brew the best way possible, by foot.”

Dan Hill said: “There's a clear, often moustachioed, overlap between those who love great coffee and ride fixed-gear bikes to work every morning. We saw that as a brilliant opportunity. As far as I’m concerned this is up there with the discovery of fire and the creation of the internet in its value to the people of earth. We are massively excited about bringing something totally unique to market.” 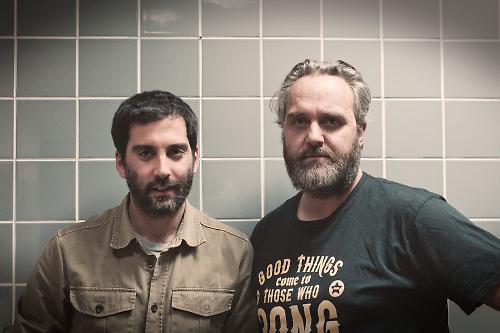 Dave Buonaguidi added: “I have been riding fixed wheel and drinking double espresso religiously for ten years. I also believe that hand or foot grinding is better than machine grinding because the imperfections in the ‘analogue’ grinding process creates an unevenness which adds to the subtle notes of the coffee flavour. The Gear Grinder is a personal dream that has finally been realized.”

Discovery of fire? ‘Analogue’ grinding process? We sincerely hope they’re not serious. If they are, they're asking £350 a time for a Gear Grinder.

You may remember Karmarama as the ad agency that rode into a storm of adverse publicity last year over a cack-handed bike safety campaign that suggested not being a “stupid twat” as a solution to the problem of cycling deaths.

Signs appeared around London with limericks detailing the deaths of fictitious cyclists, and referring to a website - ride-smart.org - that pointed out that 3,000 cyclists per year are killed or seriously injured.

The site went on to claim: “Cyclists riding like stupid twats cause a percentage of these accidents so lots of accidents, injuries and deaths could therefore be avoided." The site listed the most twattish things you could apparently do, which in order of twattishness were jumping red lights, cycling with headphones, not having lights at night and just "being stupid".

We critiqued the campaign in some detail, and it was widely pilloried by cycling groups and safety experts. Karmarama subsequently apologised and claimed that the campaign was cooked up by an employee acting alone.