Christmas Gifts for Cyclists 2011: Gifts for the discerning cyclist 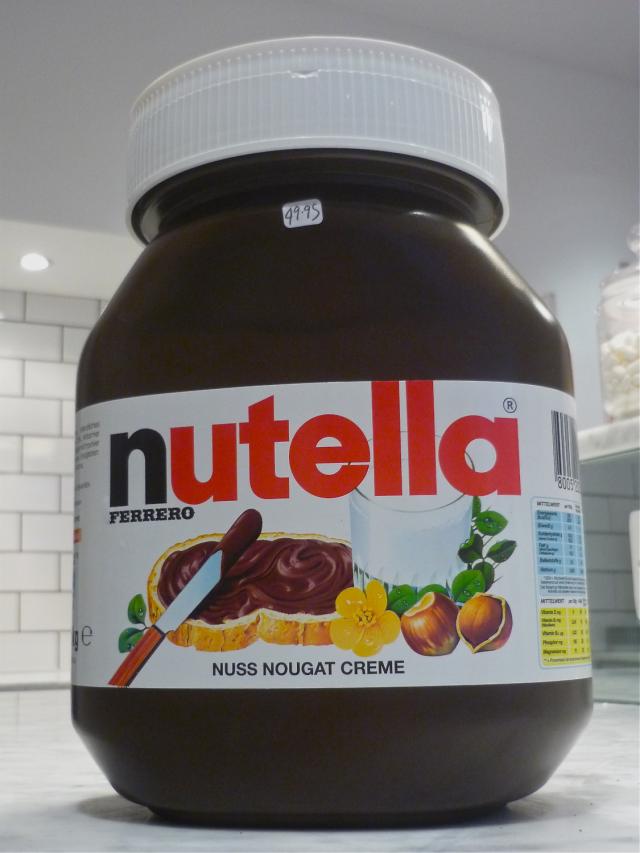 Nutella, 5kg Jar £49.95
I’d heard travellers tales tell of a legendary giant jar of Nutella from those that had ventured far and had seen fantastical pictures but was totally unprepared for its actual majesty when I spotted a real jar in a shop, like a megalith. The Holy Grail of toast, big enough to drown a baby in it should last a few post-ride banana, peanut-butter and chocolate spread sandwiches. A month, tops.
www.angelfoodbakery.co.uk or you can get a year's supply here 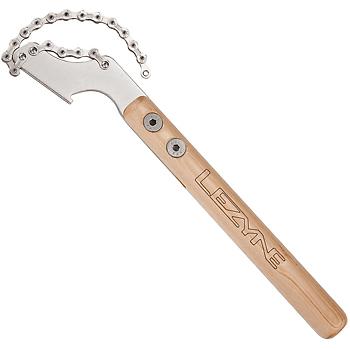 Lezyne Classic Chain Rod £20.99
Who doesn’t want a bit of tool porn for the non-specific mid-winter festivities? This is a heavy-duty 8/9/10 speed compatible chain whip, which is handy as my current prehistoric one struggles with 10 spd blocks. The CNC-machined, heat treated steel plate has an integrated lockring tool that also looks like it could just about open a bottle of beer now lockrings aren’t that common and the shaped wooden handle gives it a classic look, plus it’s always good to have a bike tool to hand that can also be used as a weapon. If you’re feeling generous can I have the matching Pedal Rod as well please, I have been a good boy.
www.upgradebikes.co.uk Gore Oxygen GT AS Jacket £179
For some reason I have an almost fetishistic love of pocket packable rain jackets, something about them needing to be small and unnoticed when not needed but once called to duty demanded to be quiet and ruthlessly efficient. The SAS of jackets if you will.

Anyway, this Gore Oxygen GT AS Jacket is a true stealth operative, made from Gore-Tex Active Shell it packs light and small into its own little pouch, is waterproof and windproof, extremely breathable and it’s beautifully minimal yet exquisitely detailed where needed. Slightly stretchy for a tight racer non-flappy fit with an exaggerated drop tail to cover your bum when in the drops and a host of other tailored refinements that shun anything superfluous. At a score change from £200 it’s not cheap but I think it’s so exquisitely made and fitted that it could just about double up as a dinner jacket.
www.gorebikewear.com 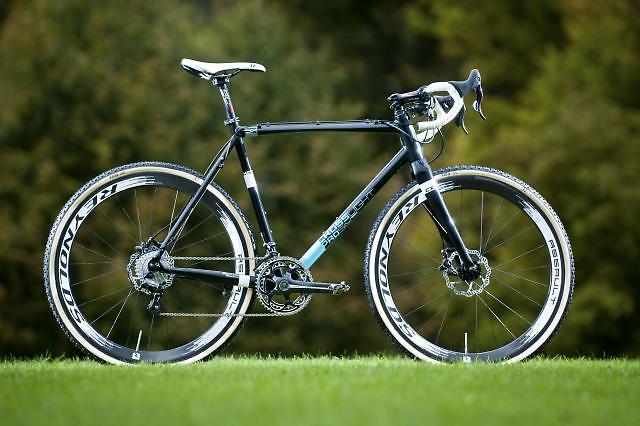 Kinesis Crosslight Pro6 Cyclo-Cross Bike, with a Parabox
Frame and Fork – £529.99
Parabox - £349.99
I’ve been riding and racing this bike for a couple of months now and I really really don’t want to give it back. The alloy frame is well on-trend with a tapered head-tube, flattened top-tube and race-fast geometry, but it comes with rack and mudguard mounts to make it a truly versatile machine, not just something for the weekend. And more importantly it’s a disc-brake specific frame with no room for inefficient cantilever brakes. I’ve always been dismissive of disc brakes on cyclo-cross bikes believing cantilevers are just fine for the slowing-down-a-bit of ‘cross racing but I’ve had my mind completely changed by this bike. Cable levers linked to hydraulic brake calipers via the Parabox converter hidden under the stem provide consistent smooth friction free braking, a world away from any rim brake, and a far cry from any cable disc leading to predictable braking even in the worst conditions, a definite advantage in both riding and racing. Soon they’re going to want this back so I’ll have to ask for one for Christmas. It doesn’t have to be this excessively lovely Record 11spd build I’d been playing on here which is a bit worrying every time a twig waves in the direction of the rear mech, a basic Ultegra build will do, the Di2 one.
www.upgradebikes.co.uk DeFeet Woolie Boolie Socks £12.49
Make sure you avoid unwrapping those ‘comedy’ Snowman socks that play a mangled version of “Walking In The Air” when you press the carrot nose by asking for some socks that might be worn for more than 5 minutes and are actually useful. Woolie Boolie socks have been the Winter mainstay for this pair of feet for about a decade now, digging out the Boolies is more a mark of the coming of the cold than any solstice. Woven with a mix of 72% Merino wool, which as you probably know keeps you cool when hot and warm when cold, is durable and doesn’t smell. Previously only available in black they now come in grey and pink, and most importantly - roadie spec. white. No more hiding a warm black sock with a thin white one then (oh fercryingoutloud -ed).
www.i-ride.co.uk 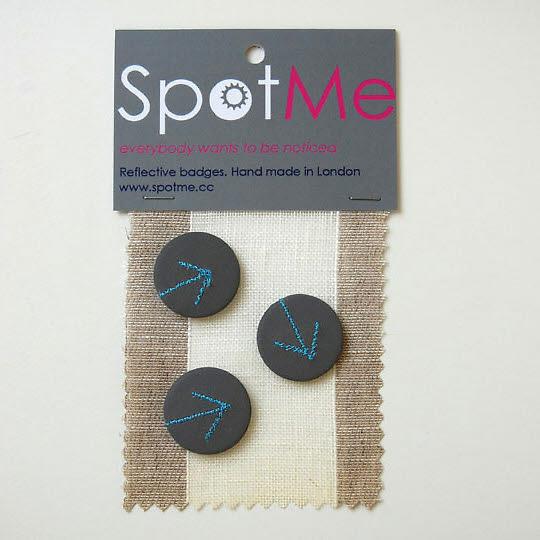 SpotMe Reflective Badges  £10 (Set Of Three)
I’m not a fan of dressing up like a railway navvy when I’m out on my bike, so no Hi-Viz vests for me or unsightly warts of reflective material stuck like an ugly rash over bike or body, but these sweet hand-made little badges might just alter that. SpotMe badges are made by Katie Barton in London from a retro-reflective fabric that glows white when light hits them and they’re small and unobtrusive enough to pin to a courier-bag or even the back of a riding jersey without looking like a Lollipop Lady
www.spotme.cc 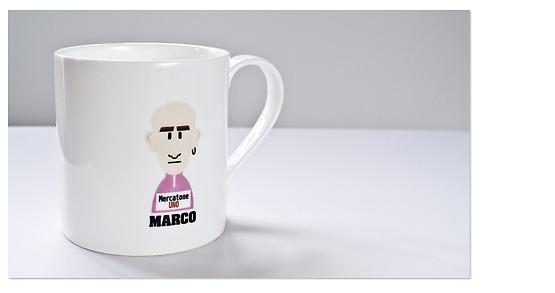 Rouleur Marco Mug £19.00
Tea. What would cyclists do without tea? Drink hot Ribena probably. Luckily both of those liquids will fit inside a bone china Rouleur mug. This new series of liquid recepticles feature a Merckx, Fignon, Lemond or Pantani design by Richard Mitchelson. The Marco face for me please because the small frail flawed Italian can still make me rub something from my eye.
www.rouleur.cc A Proper Sportive
After the fantastic experience of the Haute Route this year I’m itchy to get some more European cyclosportive or GranFondo action between my legs, a 70 mile “Classic” UK sportive round the industrial estates of Telford really doesn’t cut it against 130km over the Galibier. There’s a lot to choose from, and not just the big boys like the Etape, La Marmotte, one of the big named Italian Gran Fondos or the Nove Colli, a quick bit of research shows there’s a lesser known, cheaper, less crowded but just as well organized and arduous event every weekend somewhere on the Continent. Anywhere will do for me, but I still dream of going to the Dolomites so something painful yet rewarding and beautiful there please Santa. “Mountain High - Europe's Greatest Climbs” by Daniel Friebe £20.00
To help with researching the above this is a must have. “Mountain High” covers 50 of Europe's greatest ascents with maps, profiles, lengths and heights, and is sprinkled with stories of cycling heroes playing and suffering on those same climbs. It’s not all monsters from the big boys of the Tour, Giro, and Vuelta though as diminutive yet still harsh climbs such as the Koppenberg get a look in. Tastefully decorated with over 250 specially commissioned photographs it’s something to leaf through whilst someone gets murdered in EastEnders and then training motivation for the following harsh months.
www.myfavouritemagazines.co.uk