Back to Features
feature
Race
Tech 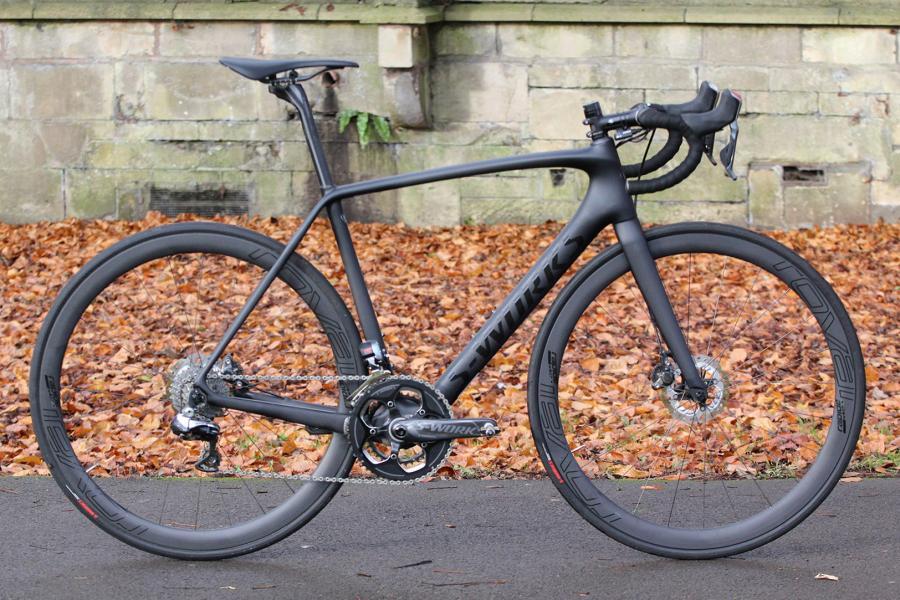 18 disc brake road bikes the pros could be racing in 2016: Cannondale, Specialized, Cervélo and more

2016 could be an interesting year for professional road racing, and I don’t mean whether Chris Froome can defend his Tour de France title. The UCI has sanctioned disc brakes on a trial basis, allowing the teams' to use disc brakes at any race they like, so it’s highly likely we'll start to see more disc-equipped road bikes in the professional peloton.

It remains to be seen how many of the teams' will decide to use disc brakes, but for some it comes down to a simple matter of having a suitable disc-equipped race bike. They don't all have that luxury. Disc brakes on road bike might have gained huge popularity in recent years, but it has largely been non-racing endurance and sportive bikes. At present there are very few dedicated race bikes with disc brakes.

There are 18 WorldTour teams in 2016, so here’s a look at the disc-equipped bikes each could ride, if they wanted to. This list is purely what we know at this stage, it’s likely to change quite a bit through next year as new bikes are launched. 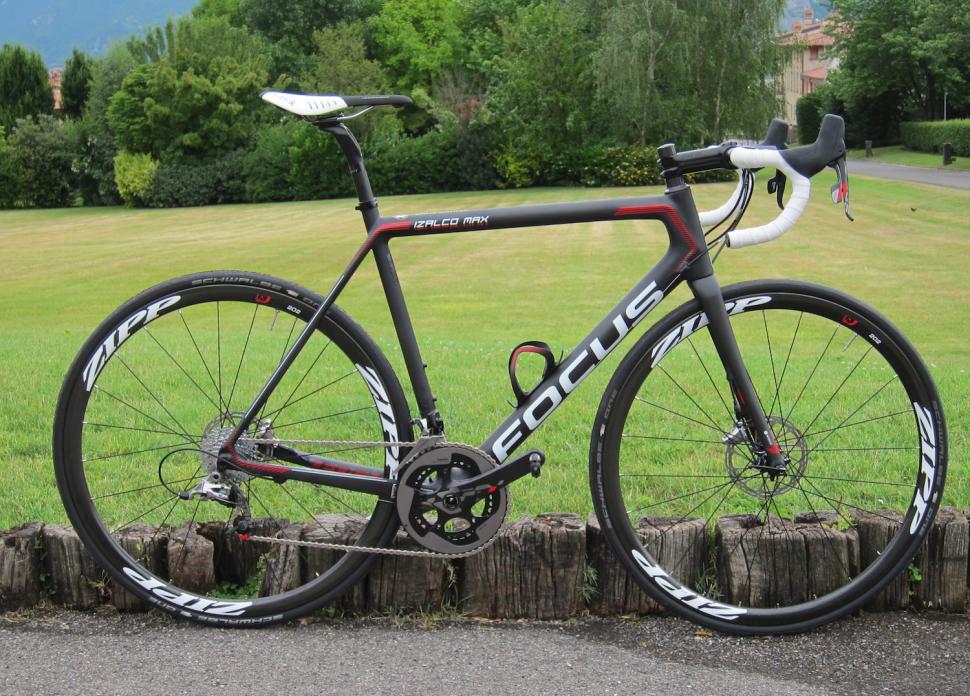 German company Focus isn’t shy about disc brakes and this summer unveiled the Izalco Max Disc, which with a SRAM Red and Zipp wheel build tipps the scales at 6.8kg. It's  based on the Izalco Max, the company's regular race bike. Not only is that right on the UCI weight limit, but it's one of the lightest race bikes available with disc brakes. It has thru-axles at both ends, a 790g frame and 320g fork, and space for 28mm wide tyres.

We’ve ridden the bike and came away very impressed 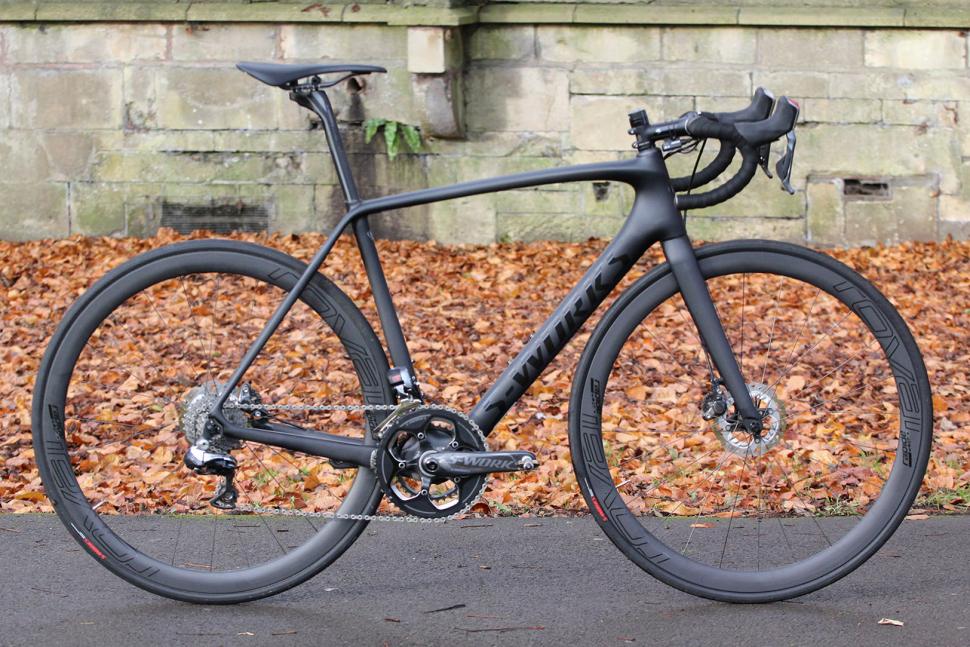 Like Focus, Specialized is another company that is ready for disc brakes, having created a disc version of its regular Tarmac this year. And as we found when we reviewed it, it has lost none of its speed in the disc brake adaptation, nor piled on the pounds - it weighs 6.9kg in a Dura-Ace Di2 configuration. What brakes the Astana team will be using remains to be seen, as Campagnolo has not shown any disc brakes yet - though it has confirmed to road.cc that it is developing them. Its wheel sponsor Corima produces a 47mm carbon wheelset with disc brake hubs so no problems there. 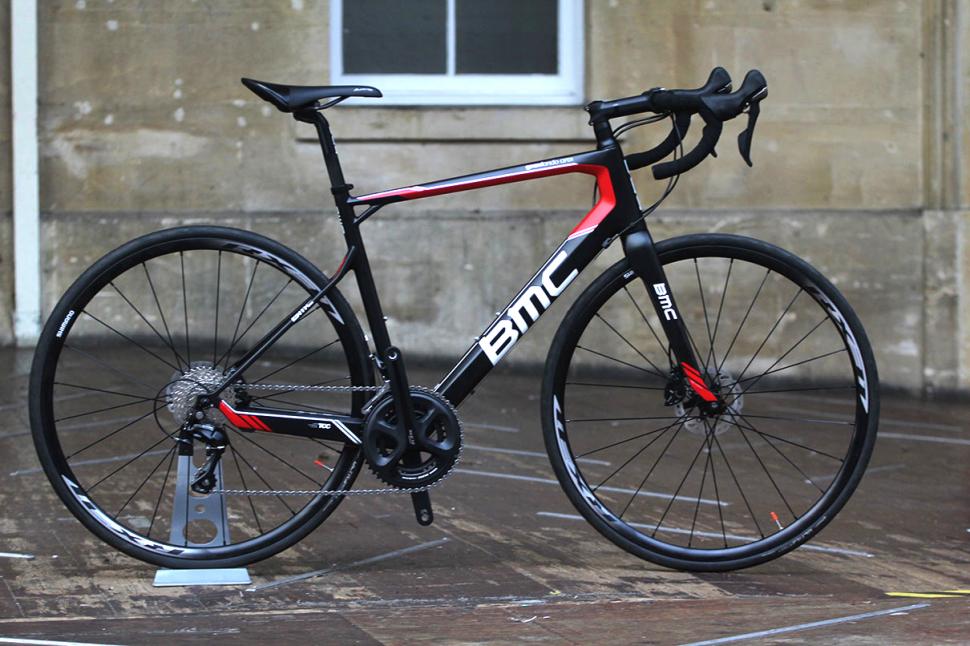 Swiss company BMC is one of the many brands that doesn’t currently offer a disc brake version of its regular race bike, the TeamMachine. It has enjoyed huge success with its GranFondo endurance bike with disc brakes however, but we can’t see Philippe Gilbert racing that bike anytime soon. Cannondale has really embraced disc brakes on the endurance and sportive side of its bike business, with the Synapse now offered in more disc than rim brake versions and the latest CAAD12 is available in a disc brake version. Still, there is no sign on a SuperSix Evo with disc brakes, and it has only just this summer released the first update to this model since its launch in 2011. Mark Cavendish’s new team has already been spotted putting Cervelo’s new R3 Disc through its paces. It’s the only team also to be using Rotor’s new hydraulic groupset, which ditches gear cables for a hydraulic system.

Like the Astana team, Etixx-QuickStep can call on the Tarmac Disc for racing duties, but no problems with disc brakes as sponsor Shimano has been producing hydraulic disc brakes for a couple of years now, and they’re proven in real-world testing. 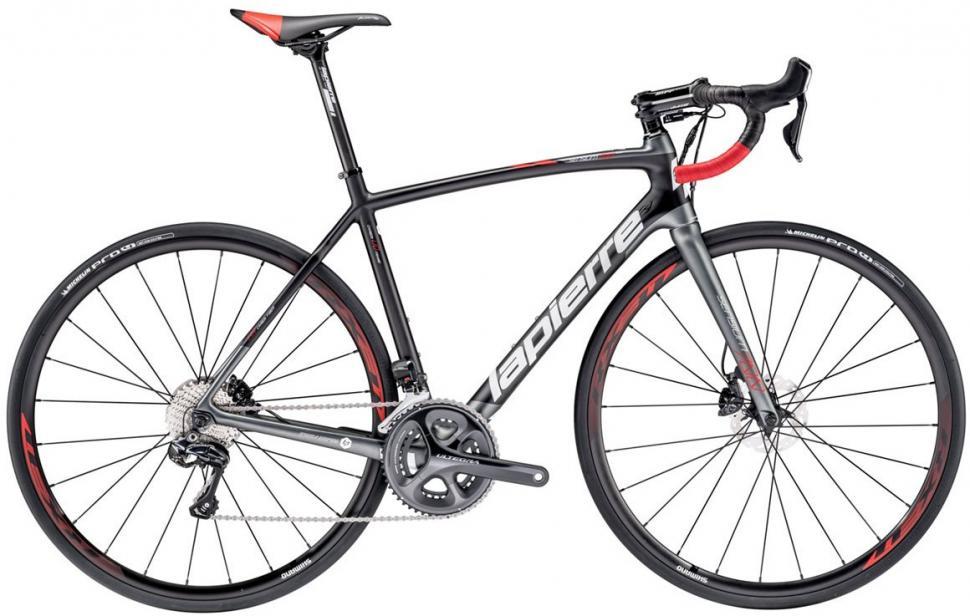 French firm Lapierre might have given its Sensium endurance bike a disc brake makeover, but there are no sign of disc versions of the Xelius SL or Aircode SL, the go-to choice of the FDJ team. The Foil and Addict are the common race bikes of choice of the IAM Cycling team, but if they want disc brakes, they’ll have to hop aboard Scott’s Solace endurance bike, as currently that’s the only disc-equipped option in the company’s bike range. Both the Addict and Foil are pretty new models as well, though the Addict is a bit older (launched in 2013) so it could be the right time for a disc brake version. Scott is one of the few brands to have embraced thru-axles. 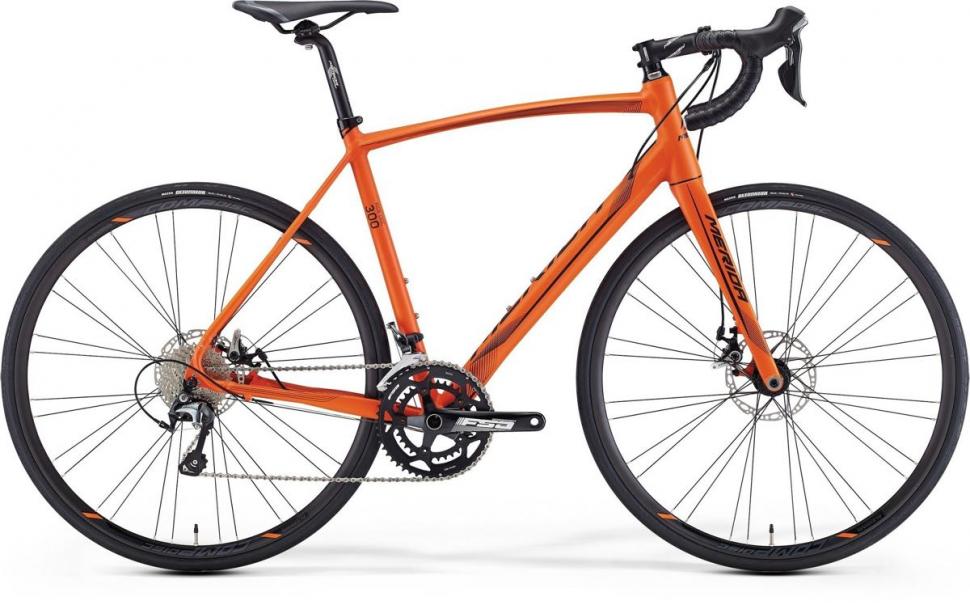 Similar situation to Scott here, in that Merida’s only disc brake road bike optionis found in its Ride endurance and sportive category. It’s been pushing the lightweight envelope with its Scultura for a few years so adding disc brakes to this model would likely keep it close to the UCI’s 6.8kg minimum weight limit. In Ridley’s bike range you’ll find the aero Noah, the lightweight Helium SL, and endurance Fenix,. It’s the latter that is available with disc brakes. The Fenix is usually spotted at races like Paris-Roubaix, where the bigger tyre capability is desirable. It’s unlikely, but not impossible, that the team could use this bike if they wanted to trial disc brakes. But could a Helium Disc be in the works? 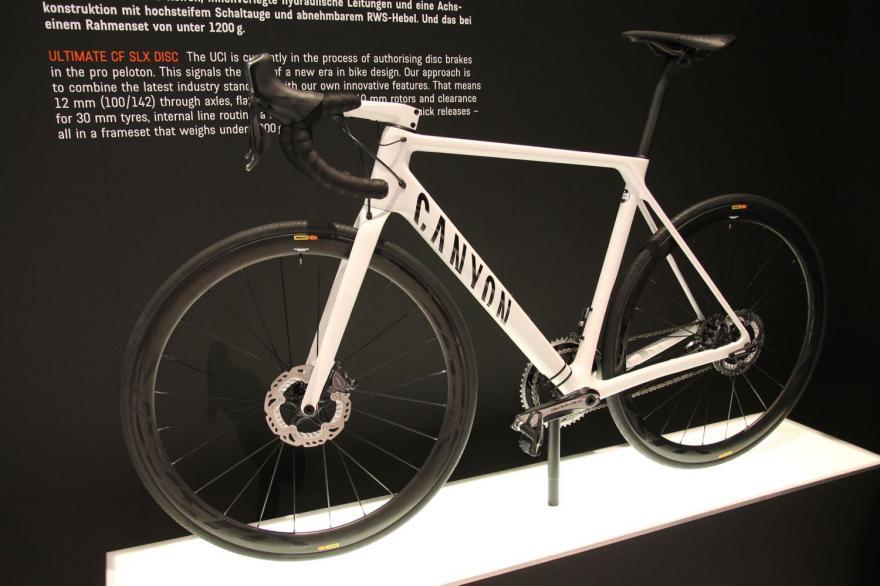 Direct-sales German bicycle brand Canyon hasn’t been quick to adopt disc brakes on road bikes, but it did let on that there is an Endurace Disc in the pipeline, and it showed the Ultimate CF SLX Disc at Eurobike earlier this year, which looks remarkably ready for production. Movistar uses Campagnolo drivetrains and there’s no sign of the Italian company’s disc brakes as of yet.

It’s the same story for Orica-GreenEdge as it is for IAM Cycling. Scott’s only disc-equipped road bike is the Solace, which as an endurance road bike with a more relaxed riding position won’t suit the racers used to the more aggressive positions and geometry of the Addict and Foil models. 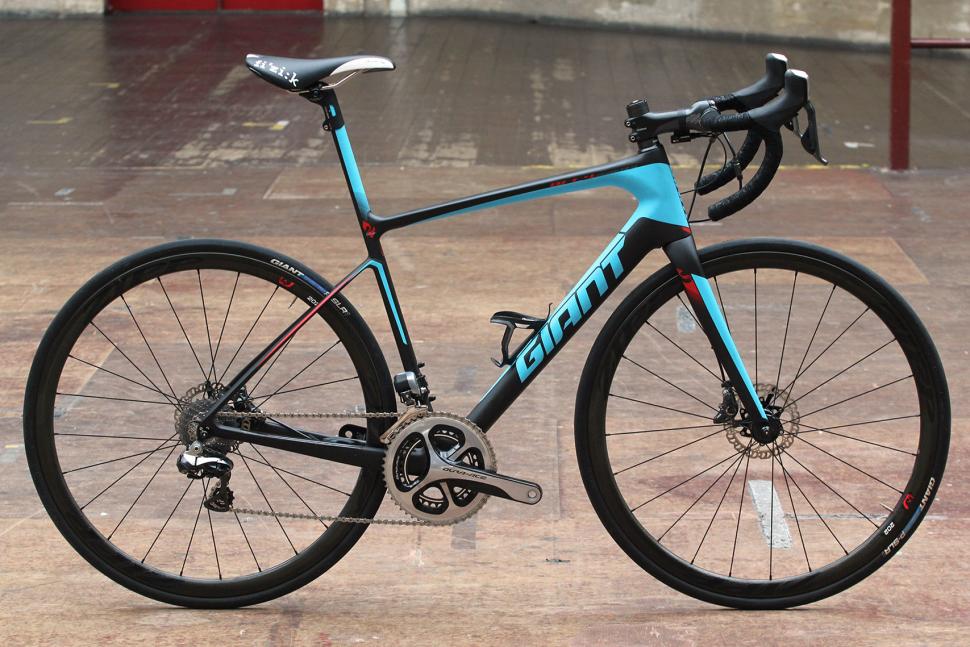 Giant is one of the big companies that has really got behind disc brakes, with its new Defy endurance bike being completely redesigned around - and only available with - disc brakes last summer. The Defy is usually only seen in the spring classics however, as there’s no sign of a TCR Disc or Propel Disc, if ever there might be?

The Russian squad has recently revealed it has switched from Shimano and Mavic to SRAM for drivetrains and wheels in 2016, and it’s been spotted testing the new eTap wireless groupset. SRAM of course does offer a hydraulic disc brake groupset, but the brakes aren’t currently compatible with the new eTap brake levers. That might soon change, of course. 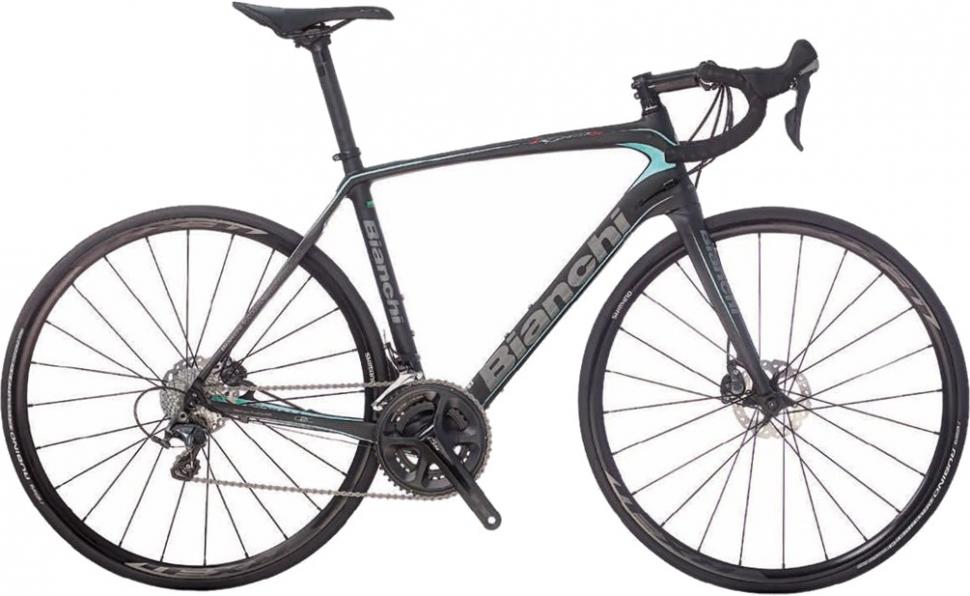 Bianchi has offered a disc version of its Infinito CV Disc for a couple of years now, but again it’s an endurance bike with a focus on comfort, both from the carbon layup but also the geometry and ride position. The Italian company doesn’t offer its Oltre race bike with disc brakes but could apply some of the lessons it has learnt developing the Infinito CV Disc into that model. 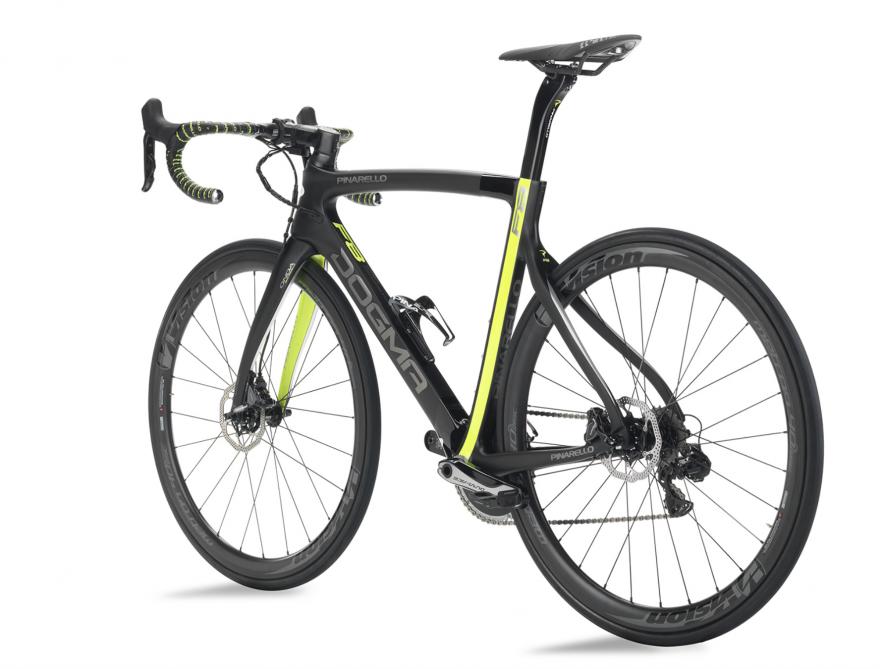 We know Pinarello has a race bike ready, the Dogma F8 Disc, and we’ve even seen Team Sky testing it in a couple of races at the end of the 2015 season. It’s based on the regular Dogma F8 Disc with the same tube profiles and aerodynamic features, but uses Shimano’s Flat Mount disc mount standard and regular quick releases.

Team Sky races with disc brakes for the first time

With a Specialized Tarmac Disc frameset and Shimano’s Dura-Ace Di2 hydraulic disc groupset, this team is ready to race disc braked road bikes. Will we see Peter Sagan or Alberto Contador racing disc brakes in 2016 though? 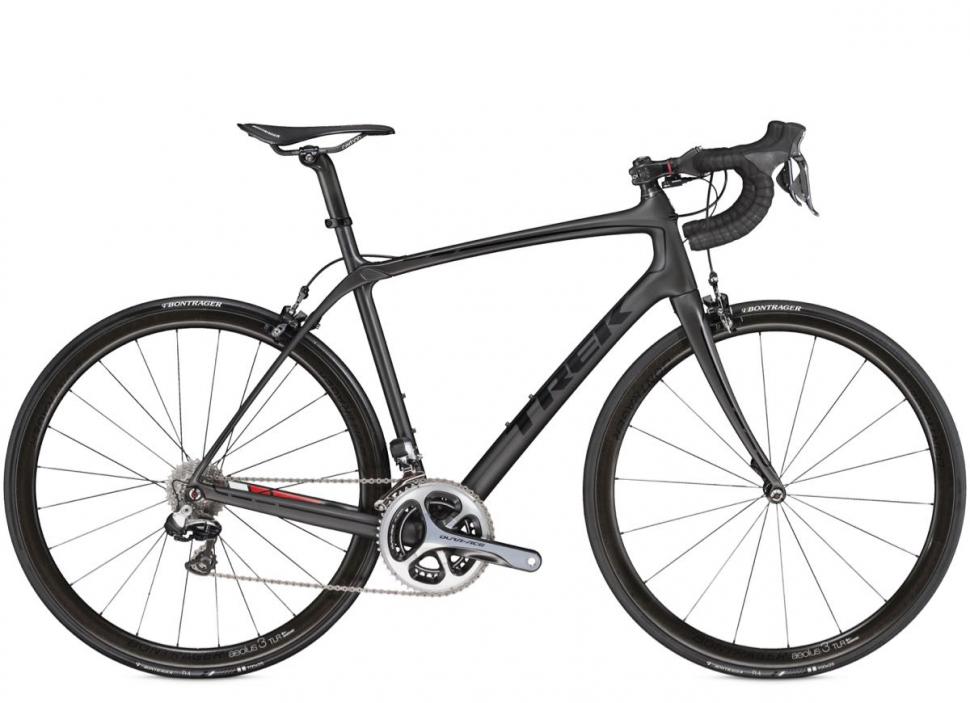 Trek has committed to disc brakes on its endurance frame platform, the Domane, but the newer Emonda and Madone aren’t currently offered with disc brakes. The team could race the Domane of course, it’s Fabian Cancellara’s preferred model and Trek offers it with a short head tube, similar to the Emonda, which suits the racers.

As you can see from this list, some manufacturers are ready with disc-equipped race bikes, but most aren't. So if disc brakes are to become standard in the pro peloton (and it's a big if) we're going to see a lot of new bikes released in the next year.