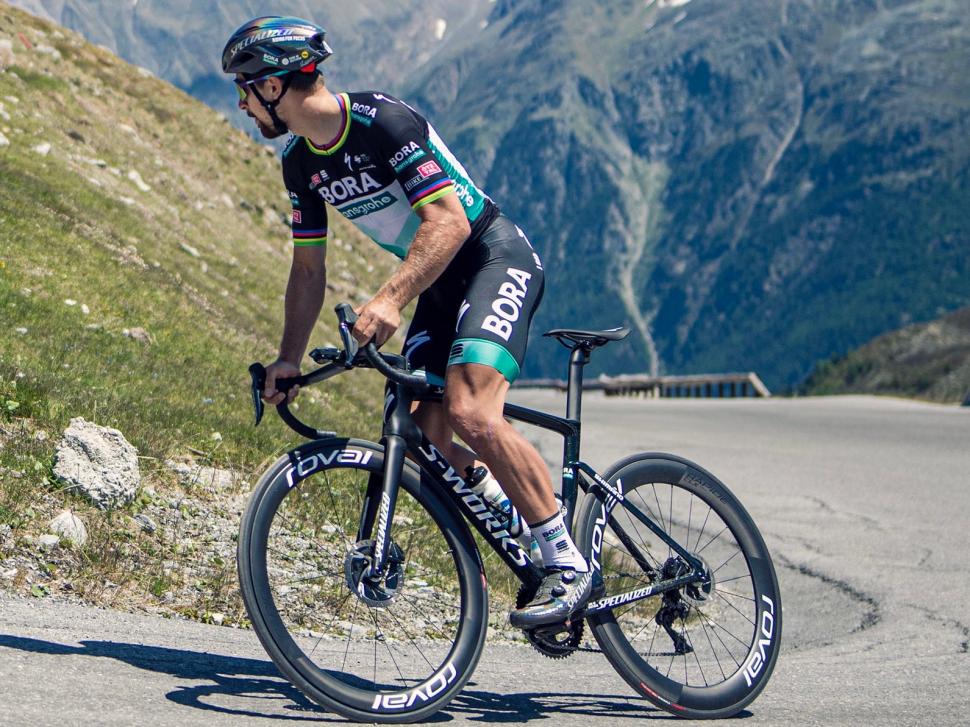 Tour Tech 2020: 10 ways bikes have changed over 10 editions of the Tour de France

Several new bikes will see their first Grand Tour action when the Tour de France begins in Nice this weekend, and we thought it would be a good opportunity to see how the tech has changed over recent years.

Specialized launched its Tarmac SL7 (main pic, above) last month and riders from Deceuninck–Quick-Step and Bora–Hansgrohe, including seven-time winner of the points classification Peter Sagan, will be riding the S-Works version in this year's race. 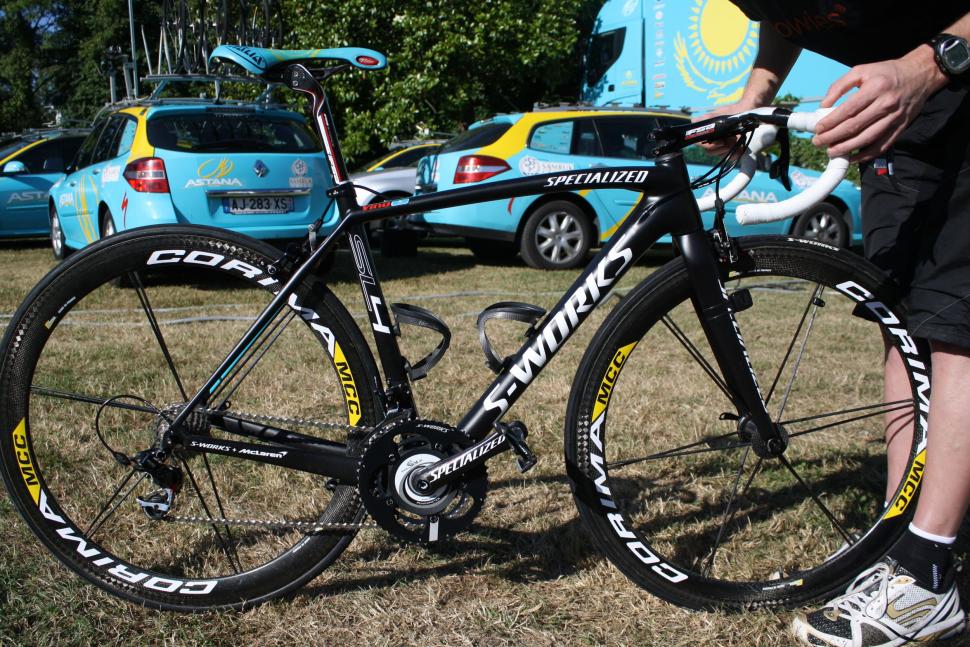 Go back 10 Tours de France and Astana's Alexandre Vinokourov (above) was one of the main contenders, racing on the Specialized S-Works Project Black McLaren Tarmac SL4. Vinokourov crashed out of the race on the ninth stage, breaking his femur, but not before we'd had the chance to take a good look at his bike.

Here's how the bikes differ.

1 Lightweight bikes have got more aero

Most brands have had a lightweight race bike and an aero race bike in their lineup for years now, but the boundaries have become ever more blurred over time and Specialized says that now there is no longer a need to have both in its range because the Tarmac SL7, launched last month, is the best of both worlds. Back in 2011, Alexandre Vinokourov was riding a Specialized S-Works Project Black McLaren Tarmac SL4, a bike designed to be lightweight and super-stiff, but not aerodynamically efficient. Specialized had the Venge in its range for that. Although it's only Specialized that has binned off the idea of making you choose between an aero bike and a lightweight bike (this is the Sagan edition of the S-Works Tarmac SL7 pictured above), many other brands have reduced the drag of their climbing bikes recently. Trek recently added aero features to its Emonda, for example, while Giant says that the 2021 version of its TCR Advanced is quicker than previous models because of aero gains.

Dropped seatstays (where the seatstays join the seat tube below the junction with the top tube) weren't a feature of the 2010 peloton but they're all over the place now, including on the the Specialized S-Works Tarmac SL7 (below). Specialized introduced dropped seatstays on the Tarmac SL6, saying that it was among several features that contributed to the bike being 45 seconds faster than its predecessor over 40km. The idea is that dropping the seatstays reduces the bike's frontal are decreases drag.

Another key reason cited for dropping seatstays is to increase comfort. The argument is that lowering the seatstay junction allows the seat tube to flex more although, of course, the seat tube is still held in place by the top tube.

Bike designers often say that a smaller rear triangle is good for efficiency too.

Find out why dropped seatstays are so popular Vinokourov's 2011 Tour de France bike was equipped with SRAM Red rim brakes (above) whereas Peter Sagan will be using Shimano Dura-Ace hydraulic disc brakes in this year's race, and a frame that takes thru axles rather than standard quick release skewers.

The UCI (cycle sport’s world governing body) first allowed the use of disc brakes in road racing for a trial period starting in 2015, and finally confirmed that they were authorised on a permanent basis in 2018. Pro cycling has by no means switched over to disc brakes wholesale but they're certainly a major feature of the peloton. Some frames, such as the Tarmac SL7 and the Trek Emonda SLR, are available only for disc brakes so teams couldn't run rim brakes even if they wanted to.

There's barely any cable/hose to be seen in the pro peloton these days, most brands having decided that everything should be hidden away both to reduce drag and improve looks (there are exceptions, Giant's new TCR Advanced having cables visible at the front end, for instance). 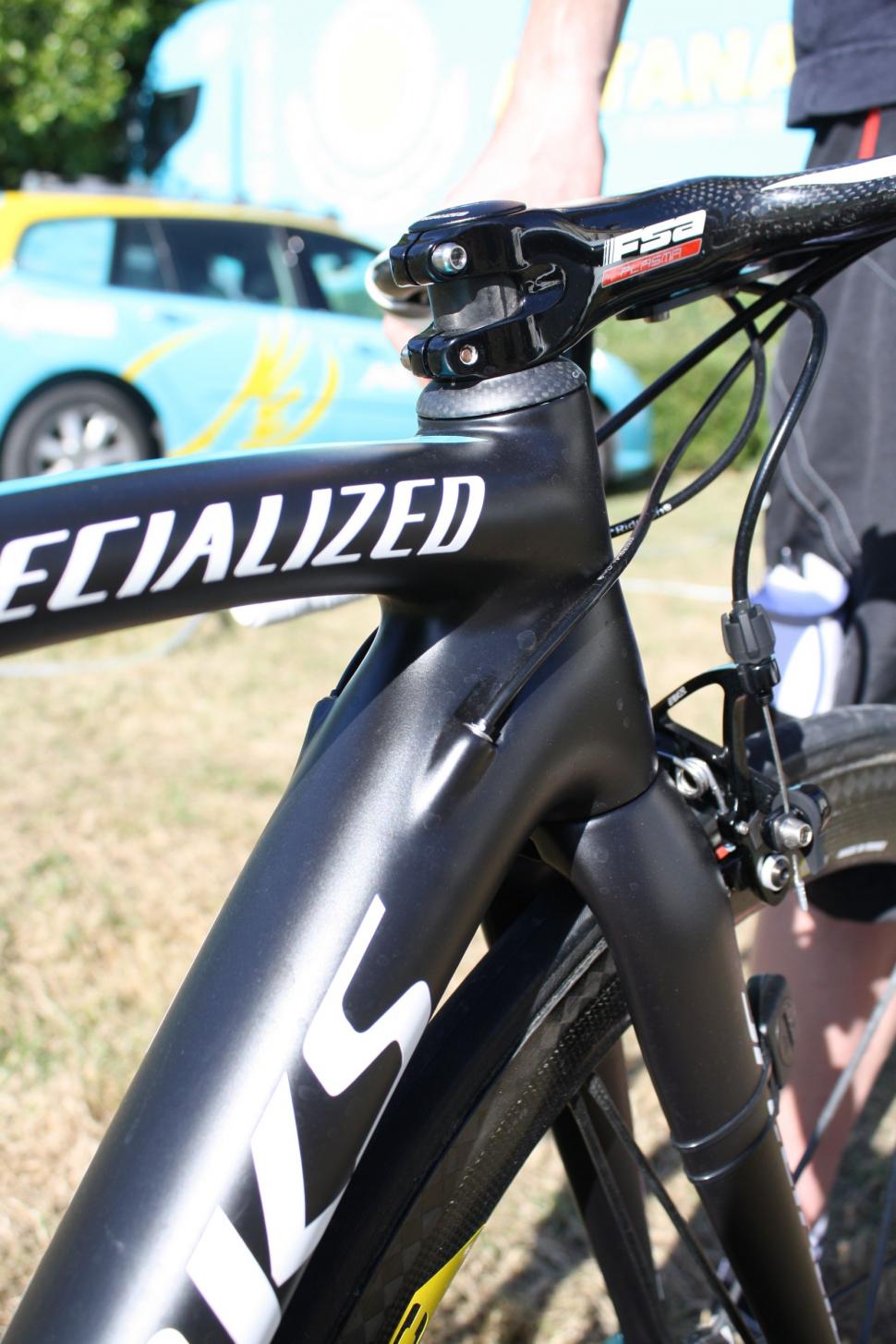 Cables ran inside the frame of Vinokourov's bike in 2011 but they were external between the handlebar and the top of the down tube, and the front brake cable was fully external. There was also a loop of cable on show between the drop out and the rear derailleur. 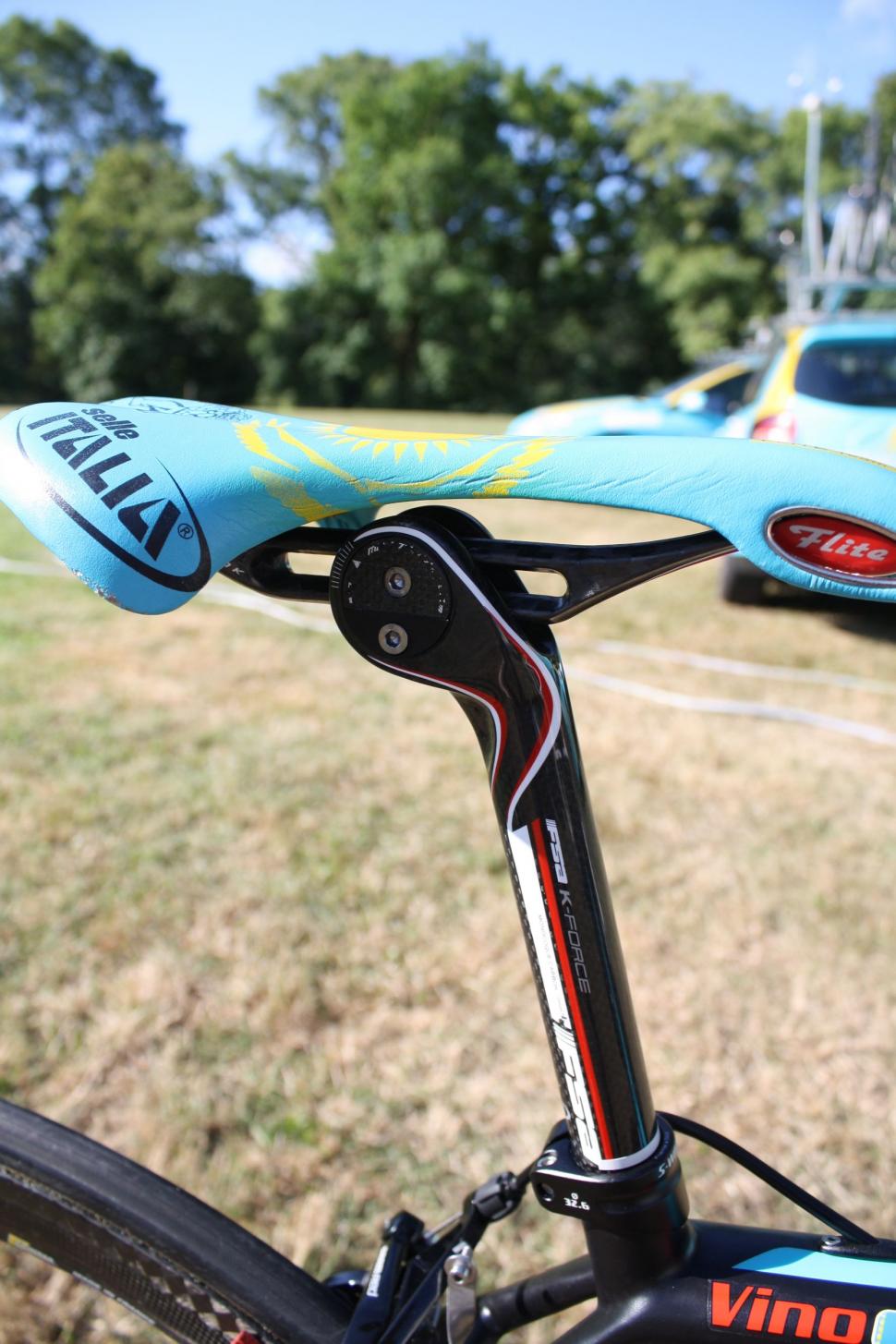 You still get the occasional external seatpost clamp on a top-end race bike – as seen on Vinokourov's bike from 2011. The Merida Scultura Disc ridden by Team Bahrain McLaren has an external clamp, for example, but most these days use an internal binding system tightened by a bolt that sits flush with the frame. 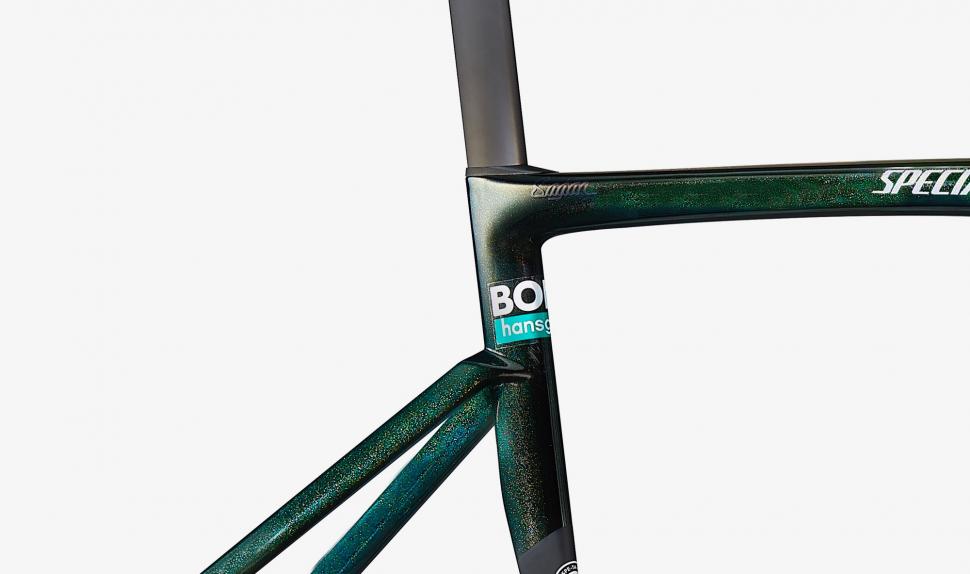 An internal system means there's nothing to interfere with the airflow in that area of the bike, and most brands prefer to use an internal design with an aero-profiled seatpost.

The other advantage is that an internal system looks neat, fitting the aesthetic of a modern race bike.

Electronic shifting has taken over entirely from cable-operated shifting in the pro peloton, Peter Sagan and his Bora-Hansgrohe teammates using Shimano Dura-Ace Di2. Shimano already offered electronic shifting in 2011 and Campagnolo Super Record EPS made its first appearance in that year's Tour de France with Team Movistar. Vinokourov's Team Astana, though, was using SRAM Red groupsets (above) and the US brand's eTap wireless electronic shifting was still several years off; it was trialled by the AG2R La Mondiale in 2015 and released the following year.

Every team in the 2020 Tour de France uses groupsets from either Shimano, SRAM or Campagnolo (chainsets from Rotor and FSA make an appearance too) – with Shimano far and away the dominant player, as was the case in 2011.

7 Tyres have got wider

We can't make out the width of the tyres Vinokourov was using back in 2011 but they were almost certainly 23mm; pretty much everyone was using 23s back then.

Fourth place today in @Milano_Sanremo. My form is steadily getting better and I feel I'm on track for the @LeTour. Thanks to my teammates for their effort and dedication! https://t.co/c57OMC4H4b

Tyres in the pro peloton have gradually got wider over recent years as riders have come to accept that a little extra width makes sense in terms of efficiency and comfort. Sagan usually uses 26mm-wide tyres.

Teams were already using deep-section rims in pursuit of aero gains back in 2011, but wheels have generally become a little deeper over the past 10 editions of the Tour de France. The Corima Aero+ MCC wheels (above) on Vinokourov's 2011 bike had a 47mm rim height whereas the Roval CLX 50 (below), which is popular with Specialized-sponsored teams, has a 50mm rim height (the Roval Rapide CLX wheels shown at the top of the page on Sagan's bike, have a 51mm deep rim at the front and a 60mm deep rim at the rear, but these wheels are clincher only and the photograph isn't from a race). Of course, riders have always had different wheels to choose between, depending on the terrain and conditions, and today's Specialized-sponsored pros often use 32mm-deep Roval CLX 32 wheels when light weight is at a premium, or 64mm-deep Roval CLX 64s for reduced drag.

Wheels have got wider too, in order to support wider tyres (above) better and to work with them aerodynamically.

The Corima Aero+ MCC wheels on Vinokourov's 2011 bike had a width of 22.6mm while the tubular version of the Roval CLX 50 has an external width of 27.4mm.

Roval says that the CLX's rim profile outperforms many deeper-section rims in terms of aerodynamics without the weight or handling drawbacks.

10 There are many more power meters Most power meters used in the 2011 peloton came from SRM, including the one used by Alexandre Vinokourov (above). However, the German brand doesn't have everything its own way these days with many other brands having entered the market. Pro cycling reflects the diversity.