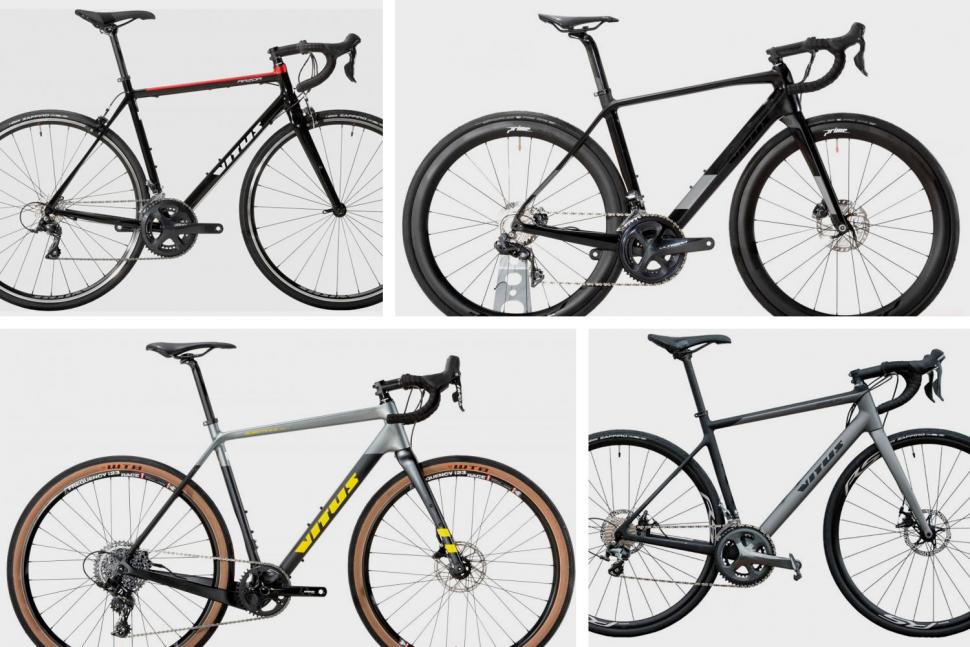 Welcome to the latest edition of road.cc’s buyer's guide to the Vitus bike range in which you’ll find everything you need to know to find the right Vitus bike for you.

Vitus has just updated its road bike range for 2019. We've updated the table at the foot of the page with any discounted prices at which you can buy the bikes from Wiggle and Chain Reaction Cycles.

The original Vitus was a brand belonging to tubing manufacturer Ateliers de la Rive and is best remembered for the 979 aluminium frames of the late Seventies and early Eighties, produced in a joint venture with Bador and CLB-Angenieux. The bonded construction was revolutionary at the time. Vitus is also known for having been an early adopter of carbon fibre.

Nowadays the Vitus brand is owned by the Wiggle-CRC group and sells through Chain Reaction Cycles and Wiggle. The group's immense buying power means prices are competitively low. The current range of road bikes comprises (in escalating order of price) the Razor, Zenium, Vitesse Evo and ZX1.

Prices in the description below are original RRPs while the table at the foot of the page has been updated to include any discount prices at which you can buy the bikes from Wiggle and Chain Reaction Cycles.

The Razor is Vitus' cheapest line of aluminium road bikes with prices as low as £499.99. Frames are made from 6061-T6 alloy that's double butted, meaning that the central sections of the tubes have thin walls to save weight and add comfort while the ends are thicker for strength and durability. The geometry sits somewhere between that of a race bike and an endurance road bike, so your ride position is fairly relaxed without being too upright. 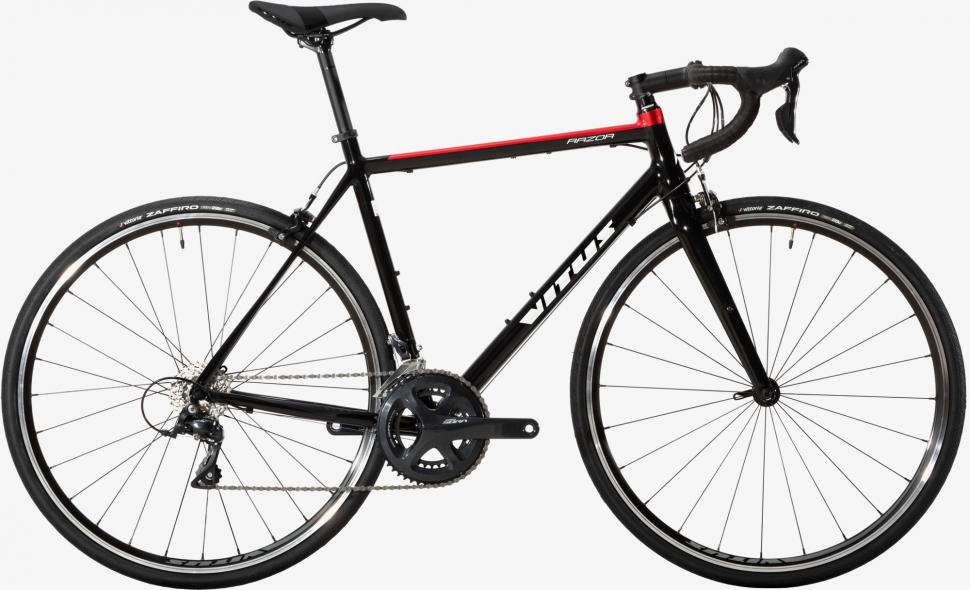 The Razor is built with slim seatstays that are designed to flex slightly to provide comfort, and comes equipped with mudguard mounts. All models are fitted with 28mm tyres for a little more comfort than you get with 25s. The drivetrains are Shimano throughout while the brakes are from Tektro.

The opening model, simply called the Razor (£499.99), comes with a Shimano's 8-speed Claris groupset and a carbon legged fork, while the Razor VR (above, £599.99) steps up to Shimano's 9-speed Sora groupset. It's also available with women's-specific finishing kit, as the Razor VRW, at the same price. Both are bound to continue selling well. The Razor VRX (above, £699.99) comes with Shimano's 10-speed Tiagra drivetrain, including a 52/36-tooth chainset rather than the compact chainset (50/34-tooth chainrings) found on the other bikes in the range.

Check out our review of the 2018 Razor VR

Vitus has added disc brake Razors for the first time in 2019. As with all Vitus disc brake road bikes, the brakes are flat mount standard with 160mm rotors and 12mm thru axles, and the cable routing is fully internal.

As with the rim brake models, you get a double-butted 6061-T6 alloy frame with a carbon leg/ alloy steerer fork. The Razor VR Disc (above) is £100 more expensive at £749.99. Go for this model and you step up to a Shimano Sora 9-speed drivetrain with a 50-34-tooth chainset, the same as you get on the cheaper model, but with an 11-32-tooth rather than an 11-28-tooth cassette, giving you a wider range of ratios. You also get Tektro Spyre mechanical disc brakes.

Assuming that the disc brake Razors ride as well as the rim brake models, these look like great value for money.

Buy if: You want an entry-level aluminium road bike that offers lots of value.

Last year's Zenium bikes were aluminium but Vitus has introduced a carbon-fibre frameset for 2019.

The Zenium is designed as an all-rounder that can act as everything from a winter workhorse to a nippy sportive bike. The frame and fork are both made from T700 HM-UD carbon fibre. 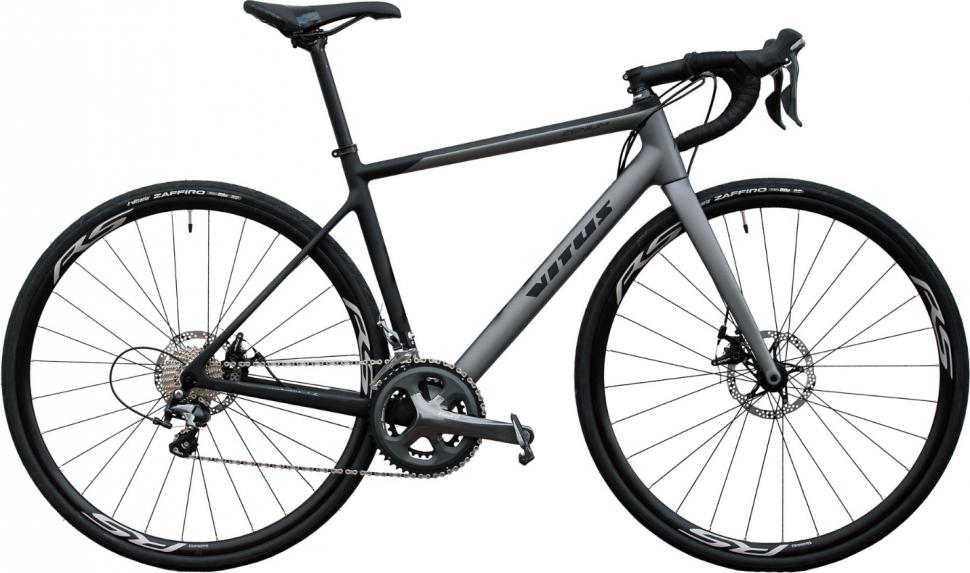 Unlike its aluminium predecessor, the carbon model does not have mudguard eyelets. Vitus says that with many brands offering very good clip-on mudguards, it thought this a compromise worth making.

The cheapest Zenium, equipped with a Shimano Tiagra/Sora groupset and TRP Spyre cable-operated disc brakes, is £899.99 – the same as the similarly specced 2018 version which came with an aluminium frame.

The Zenium CR and CRW (the women's version) each come with Shimano's mid-level 105 groupset, including hydraulic disc brakes, and they're priced £1,259.99. We've not ridden either of these bikes but it they're anything like as good as last year's aluminium Vitus Zenium SL VRX Disc then you're getting a lot of bike for your money here.

Read our review of the 2018 Vitus Zenium SL VRX

The Zeniums are fitted with 28mm wide tyres although there is clearance for 30mm if you want to swap in the future.

Buy if: You're after a disc-equipped bike that's suitable for everything from commuting to big rides at the weekend.

The Vitesse Evo is a lightweight race bike that's now available only in disc brake options, Vitus having ditched the rim brake models for 2019. All models are fitted with 25mm tyres but they have clearance for 28s.

The UCI certified frame is made from T700 carbon with an oversized down tube and bottom bracket, and a tapered head tube, and the fork is made of the same material. As you'd expect, the geometry puts you into a low and aggressive ride position – a traditional race bike setup. All three models come with Shimano groupsets, including 52/39-tooth chainsets and 11-30-tooth cassettes. 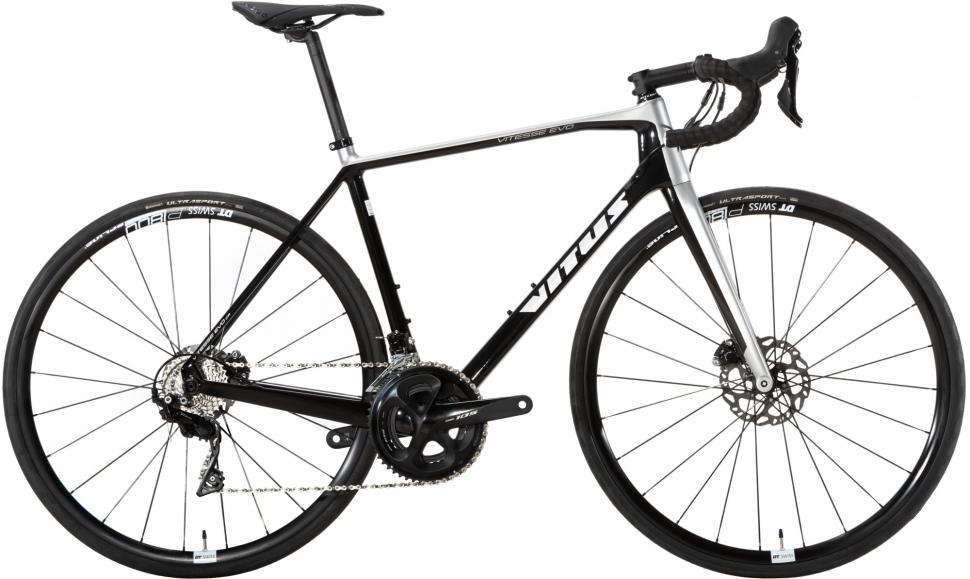 When we reviewed the 2017 Vitus Vitesse Evo Disc Ultegra we described it a "fast and responsive race bike that excels on descents and is no slouch on climbs". We called it "an affordable package, backed up by superb performance". 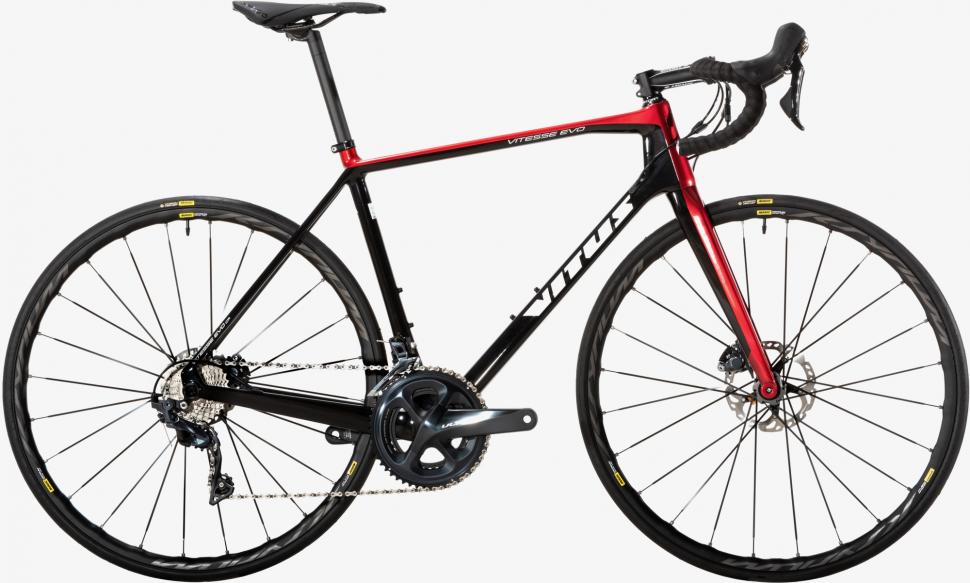 If you can stretch to £3,199.99 you can get the Vitesse Evo CRI Disc (above) with electronic shifting and Prime RR-50 V2 carbon wheels.

Buy if: You're looking for a responsive carbon race bike that performs well across the board.

The Vitus ZX-1 was a carbon fibre monocoque race bike launched way back in 1991 by Vitus 1.0. The name was revived in 2018 on this model. Like the original, this version has aerodynamic features: the Kammtail tube profiles are designed to reduce drag, for instance, and the fork crown integrates with the frame. The ZX-1 takes disc brakes, comes with an asymmetric bottom bracket and chainstays and the wheels are held in place by thru axles front and rear. 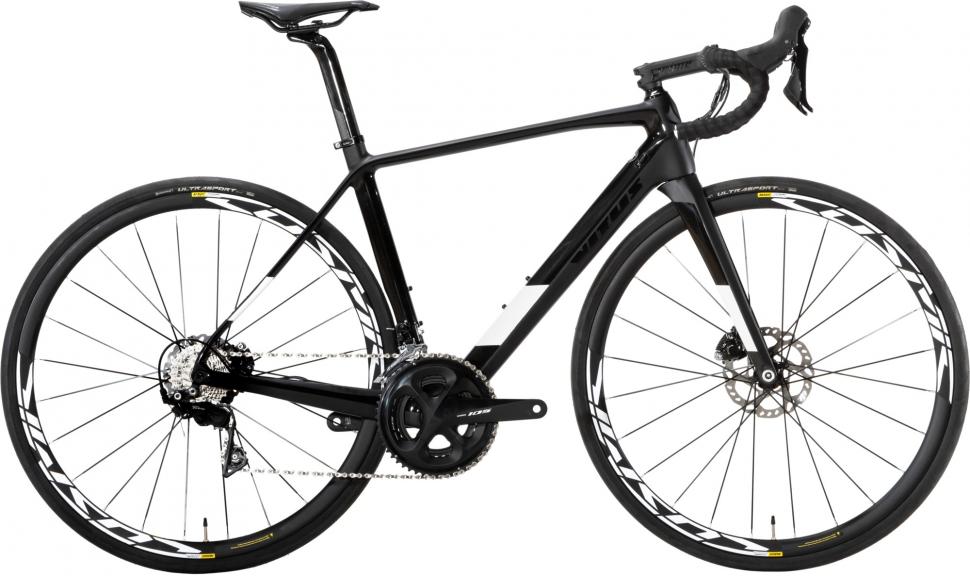 The most affordable model is the £2,099.99 ZX-1 CR (above) which is built up with Shimano’s mid-range and highly regarded 105 groupset. The wheels are Mavic Cosmic Elite CLs fitted with Continental’s entry-level Ultra Sport II tyres. Step up to the ZX-1 CRS (above, £2,799.99) and you get Shimano’s second tier Ultegra groupset and Prime’s Black Edition wheels with 50mm-deep carbon rims. 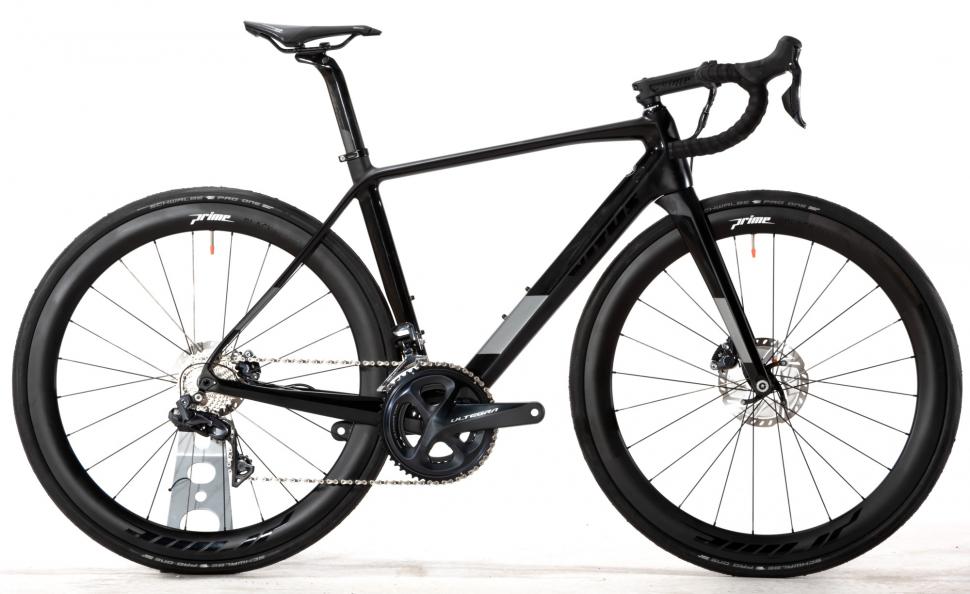 The highest specced ZX-1 is the CRX (£4,599.99) which comes with the mechanical version of Shimano’s top tier Dura-Ace groupset along with DT Swiss ARC 1100 DiCut wheels in a 48mm depth.

Buy if: You’re after a race bike with aero features and plenty of value.

The Six is a new track bike that you can either ride at the velodrome or on city streets (if you fit the supplied brakes). The frame is 6061-T6 aluminium alloy and the fork is alu too. You get reinforced dropouts and built-in chain tugs.

The wheels are Vitus's own with a flip-flop rear hub so you can run the bike fixed or with a freewheel.

Buy if: You’re after a steel fixed/singlespeed bike for the track and/or urban streets.

There are three Substance bikes in the range, two built around a 4130 chromoly steel frame and the other carbon fibre. All of them have mounts for racks and mudguards.

Vitus sees the Substance as a tough adventure/all-rounder lineup with models that can handle various different road surfaces, the idea being that you can use them for everything from commuting to bike packing. The Substance range starts with the £849.99 Substance FB (above) – the 'FB' standing for flat bar. It has a geometry that's specifically designed for a flat bar, with an increased length of top tube.

The Substance FB is built up with a full-carbon fork, Shimano’s fifth tier Sora groupset and TRP’s cable operated Spyre disc brakes. The 48/32-tooth FSA chainset is paired with a 9-speed 11-32-tooth cassette to help you get up steep hills fully laden. 38mm-wide tyres will keep the ride comfortable even over rough roads. 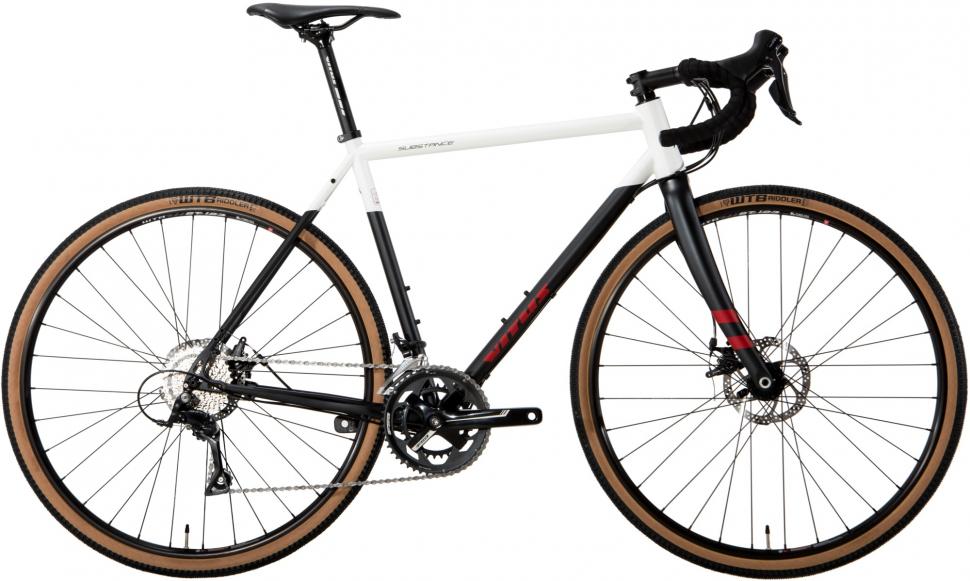 The £949.99 Substance (above) is a similar build but it gets a drop handlebar and WTB wheels and tyres.

Read our review of the Vitus Substance V2 Apex 1

The £1,799.99 Substance CRX ​(below) has a T700 carbon frame and a full-carbon fork. With mounts for racks, mudguards and multiple bottles, it’s designed for adventure riding. The Substance CRX is built up with a SRAM Apex 1 groupset with a single 40-tooth chainring matched to a wide-ranging 10-42-tooth cassette.

It is also fitted with 650b WTB Frequency wheels and big volume WTB Horizon 47mm tyres. The wheels and tyres are tubeless ready. If you want to go tubeless the necessary valves and sealant are included.

Buy if: You’re looking for a multi-surface bike with plenty of versatility. 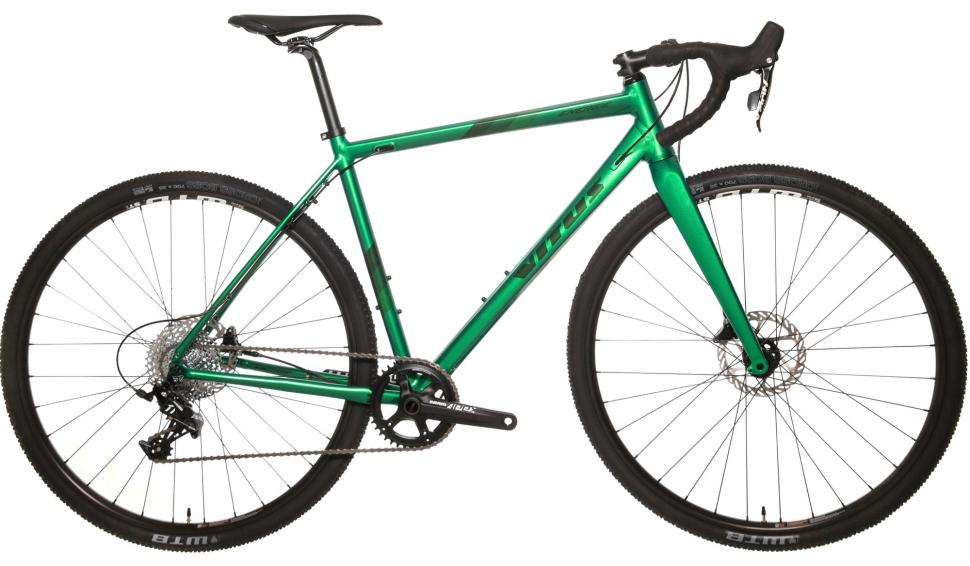 The entry-level model, simply called the Energie (£999.99), is built around a triple-butted 6061-T6 aluminium frame with a T700 unidirectional carbon fibre fork. This one comes with Sram's Apex components, including hydraulic disc brakes.

Check out our complete guide to Sram road bike groupsets. 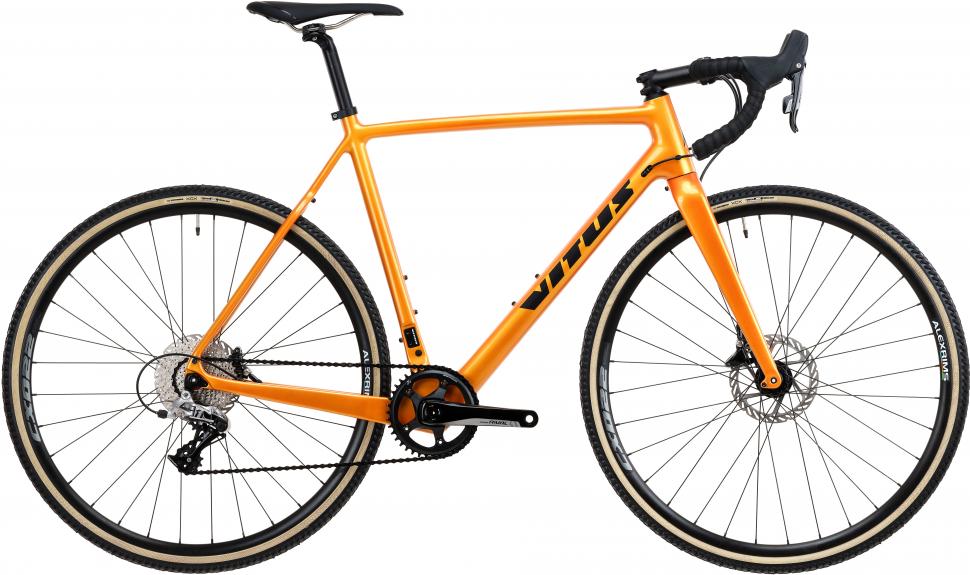 The £2,299.99 Energie Carbon CRX, has the same T700 carbon frame and fork. It still gets a 1x drivetrain, in this case Force, which is second only to Red in SRAM's hierarchy. And there's a new top dog in the Vitus cyclocross range for 2020, the Energie CRX eTap, above. The new addition has SRAM's dramatic 12-speed Force AXS eTap wireless electronic shifting.

Buy if: You’re after a race-ready cyclocross bike with a 1X drivetrain.

Prices in bold indicate a price drop since this guide was last updated in late June.