Riding In The Shadows Of Giants 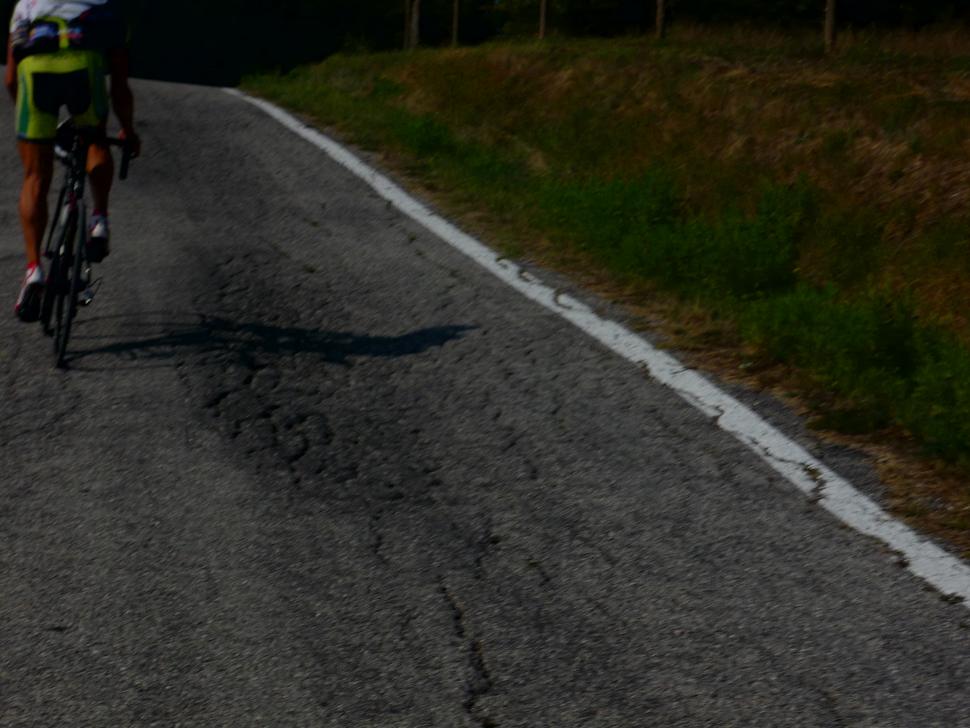 We can all dance on the pedals. Most of us are wearing clogs

The last day, and as is traditional of cycling holidays, time to rip the legs off so as to sit on the aircraft home with happy achy legs and a chamois full of memories (hmmm, maybe I should rephrase that). I join the fast road tour guided by Felice, an ex-pro with a chinese whispers palmares that is impressive whichever version you listen to.

Judging from the shell-shocked look of some of the cyclists I saw yesterday halfway through one of Felice's rides this could be, um, involving.

The first gentle climb away from the coast and Felice is setting a steady effortless tempo up front which is perfectly gently hard for those sat behind, and while I'm watching his legs beat fluidly up and down he sits up and without breaking cadence, line, speed or sweat takes off his gillet and stuffs it into his back pocket. Without breaking cadence, line, speed or sweat. Seamless.
Pro.

Felice leads us up and down and around and through the countryside at the same metronomic cadence that's just enough to keep the 8-strong peleton from falling apart and as we hit the first major hill of the day he lets us loose to make our own pace to the top, not before slipstreaming a truck at about 45kph, going up the hill. Just for giggles.
Fast pro.

After a few days being polite on group rides it's a glorious release to let fly the angels in the legs. It's a good steady climb with speedy tarmac and I'm feeling pretty chipper but am tragically aware as I near the top that Felice could merrily skip past me at any time making me look like the sweaty, snotty and frankly ponderous cyclist that I really am. With 50 metres to go to the summit I can't stop myself and have to glance over my shoulder. There's no-one in sight but still I shift gears and sprint to the top, just in case. I have clearly been gifted the climb as Felice appears as the back-marker sweeping up the group, and at some point during the ascent he's taken off his helmet and strapped it to his bars whilst nonchalantly pedalling.
Pro.

The feature climb of the day starts with a series of tight steep hairpins and gradually works its way out of the trees to a succession of false summits and last corners all on cracked leaden tarmac. One of those climbs where it's perversely nice to feel the pain in the legs, the rasping in the chest and the mild disappointment of each false crest to be instantly replaced by renewed effort. Watching a forearm sweat bead up in the hot sunshine and feeling warmth bounce back off the tarmac both spawn an inward smile.

Felice breathlessly pedals alongside me, taking pictures, I can feel he's measuring me against the other sluggish puny mortals he's ridden with up this hill. I already have enough humility crammed into my rear pockets to strain the stitching but if he were to hand me a musette bulging with more I would happily yet piously grab it and swing it over my shoulder to carry to the top.

Again and again he springs ahead, maybe to see how long I can follow his wheel, and with his shaved head, slight physique and Italian Cycling Earring™ as he rides through the fuzzy-with-effort of my periphery he has the aura of Pantani about him.
My breathing gags, the pain comes from deeper within my chest, my eyes blur a fraction further and the angels pause. Just for a moment.

We can all dance on the pedals, a very few do so in ballet-shoes, most of us are wearing clogs.