Team road.cc lines up to do the Dirty Reiver 200 gravel race in April Gravel riding. It’s all the rage at the moment, with more new bikes and events popping up all the time. Last year the inaugural Dirty Reiver 200 in Kielder Forest became an instant classic, and word quickly spread through the cycling community and it seems there is a whole load of interest in the 2017 edition.

Including among the road.cc team, with road.cc founder Dave Atkinson, review team contributors Stu Kerton and Mike Stead and tech ed David Arthur all signing up for the event. It’s a couple of months away yet and we’re going to bring you regular (hopefully) updates on how the team are preparing, but before all that, here’s an introduction from each team member and their reason for entering the Dirty Reiver 200.

I went out on a gravel ride a few weeks ago with Bruce from Kinesis, who did the Dirty Reiver last year. On one particularly bumpy and grotty section I jokingly said that I imagined the Reiver to be just like that, for ten hours. To which his response was: yeah, pretty much. And other people I know, who are much fitter than me, have decried it the hardest ride they've ever done. So I'm in no doubt it'll be, you know, challenging.

Training-wise I'm currently doing my training miles indoors, on TrainerRoad, and I'll continue that right up to the ride. The structure, and the shorter duration compared to actually leaving the house makes it easier for me to fit it in and work towards a goal, although I'm not looking forward to the three-hour sessions it's suggesting I need to do nearer the time. That doesn't mean I won't be riding outside but I'll try to have fun out of doors and stick to looking at the numbers when I'm in my spare room.

I've got some weight to lose: ideally I'd be under 90kg for the Reiver (and even more so for my second target of the year, the Maratona) so I have the Christmas excess to work off and some more on top. The Quality Street are all finished now so I'll be back to what I know works for me: low carb eating. It's all planned out, in the sense that I've written a load of decreasingly large and increasingly fanciful numbers on a chart. It might work.

I'm not so worried about the distance or the time in the saddle, as I'm fairly used to them. I am worried about whether my still-slightly-dodgy wrist will cope with 10 hours of abuse, and what exactly I need the emergency whistle for. It's the time of year where the weather can be joyous or abysmal, a couple of weeks after the LVIS Audax in Bristol, which I've done in short sleeves and three pairs of gloves in consecutive years. Here's hoping for a nice day, eh? This year I'll be doing that ride again, plus the journey to and from the start in Bristol, as a 280km warm-up for the big event. That should give me an idea of what my legs (and wrist) can take. 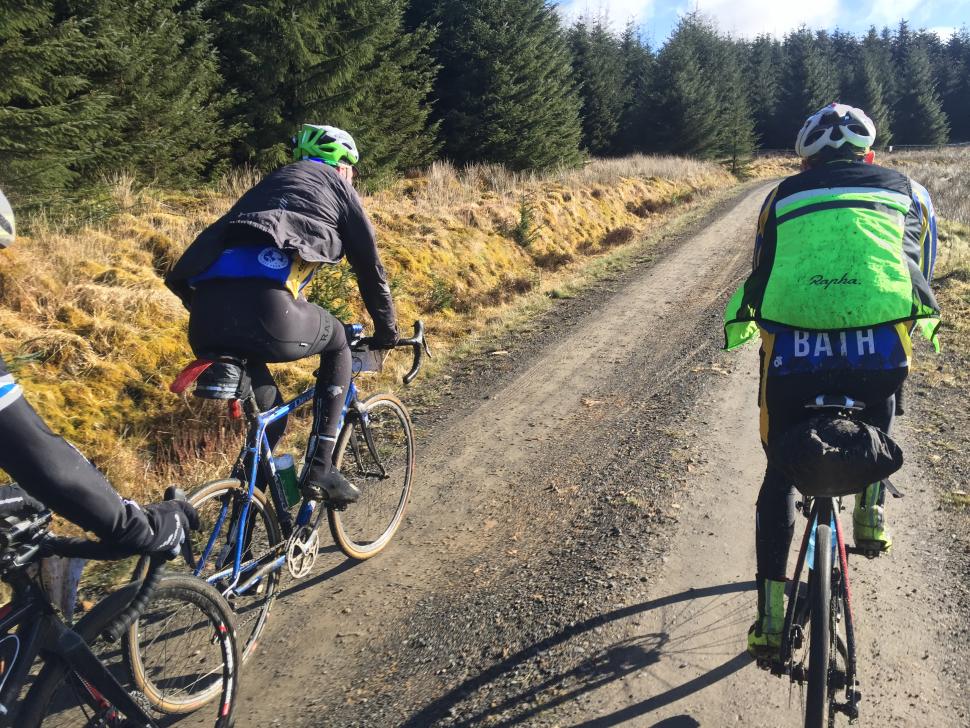 Team-wise it's difficult to know what to expect from this one. I'm more or less on a par with Stu, fitness wise, and other Dave is a lot fitter, with Mike a keto-adapted unknown quantity. It seems unlikely we'll all be together at the finish, but you never know. We should probably plan at least one training ride together.

I'm all good for bikes. I have my Kinesis Tripster ATR, and I've thus far managed to hang on to the neon-green Vitus Energie I've been racing 'cross on over the winter. I think I'm leaning towards the green machine, mainly because I can't be bothered to take the mudguards off the Tripster, and it'll make me easier to find if I end up in a ditch. But if it has to go back I'm still sorted.

In 2016 I took on the challenge of the mighty Corinthian, a 300k one-day road ride in the Lake District. Reading the reviews of the inaugural Dirty Reiver, at 200k but with similar climbing and gravel underfoot, it seems a similar-scale opportunity for self-flagellation.

Something to aim at and train for positioned to slingshot me into summer at race-weight and fitness. I'm back on the Keto wagon and this time using two TrainerRoad turbo-based plans to build up and specialise for the all-day consistent effort.

My bike plans are fluid - possibly a new gravel bike, or I might just bung those 33mm (measure up at 35mm) Challenge Strada Bianca's  back on my Merida Ride 5000 Disc and hope for the best.

If a poll was held in the road.cc office of which members of staff to send on a weekend jolly involving knobbly tyres, low tyre pressure, bike luggage and 200km of gravel, I guarantee my name would be the last to be uttered or scrawled on a piece of paper.

You see I like my tyres skinny, like proper skinny and the display on my digital track pump doesn’t even engage until 100psi, as for luggage on a bike, pfffffttt….I don’t even own a bottle cage!

All this changed a few months ago, though, well to a degree. I’m a bit set in my ways you see. I had three gravel/adventure bikes to test and thanks to a friend with plenty of local knowledge I found out I had an entire gravel playground a mile or so from my front door.

I’ve been like a kid again, splashing through puddles, pulling skids, falling off and enjoying the traffic-free military by-ways as they criss-cross the Salisbury Plain.

It’s added a whole new dimension to my riding. The way the bike moves about beneath you on pea-sized gravel or bunny hopping potholes ignites that adrenaline giggle plus above all else, just enjoying that feeling of getting away from it all, just you, your bike and the countryside. So when the Dirty Reiver was casually mentioned in the office one afternoon a ‘hell yeah’ was the only response I could think of.

I’ve ridden 200km a fair few times before but never off-road so I know it’s going to be a challenge as there will be a whole lot more going on. It’s enough of a challenge that I’ve actually considered training rather than just turning up and blagging it. 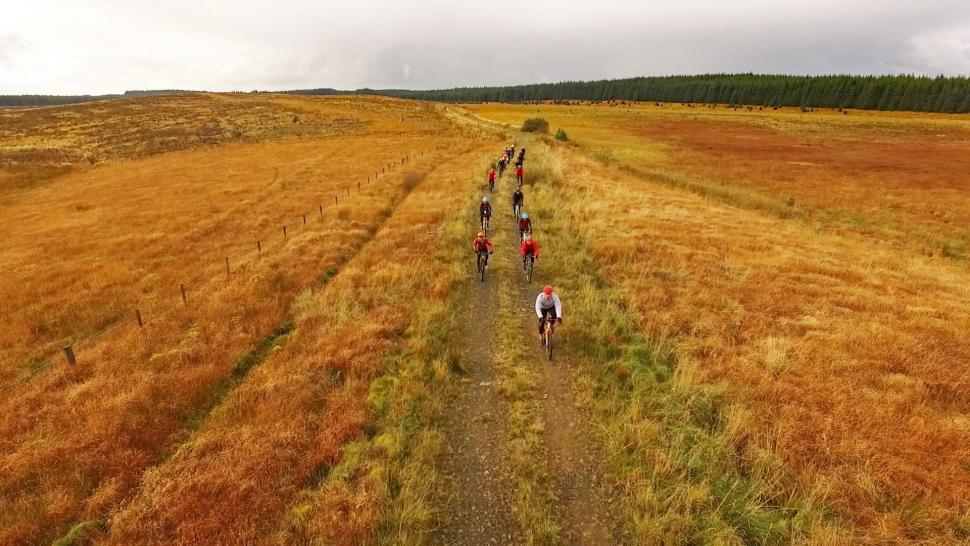 An FTP (Functional Threshold Power) test the other night revealed I’m putting out the largest amount of power that I ever have, even more than my time-trialling days so I’m not in a bad place for starters. I could do with dropping a stone though to increase the 3.73w/kg a touch higher so the Stella will be swapped for water or something, well at least a few nights a week anyway.

As far as actual training goes I’ve got a couple of tester events in the pipeline, my old clubs Reliability Trial for one which if I ride there and back should see a distance of 160km covered at the end of January plus I’ve entered the LVIS Barry’s Ball Buster with the two Daves, a 214km audax just two weeks before the Dirty Reiver. This will either be an ‘icing on the cake’ kind of event or an ‘oh bollocks‘ one when I realise I’m seriously under prepared.

In the build up the rest of the weekly miles will be shorter and at a decent pace. I once read a book written by a solo RAAM rider who did most of his training flat out riding evening crit races, his theory was that if you can ride at 20-25mph for an hour you could ride at say 14mph for days without pushing yourself. It’s worked for me for years so I’m not going to change things now. Plus after years of hammering up and down dual-carriageways as a time triallist from a quick ten to a hundred miles, I’m most happy tapping out a steady pace for hours on end.

The hardware is going to be important too considering the amount of time that we’ll be spending in the saddle on unforgiving terrain. I don’t actually own a gravel bike so I’ve been on the blag and as I write the plan is that I’ll be able to borrow a Mason Bokeh demo bike with a SRAM Force 1x11 groupset and running a set of Hunt 650B wheelset.

I had the chance to ride the Bokeh we recently tested for a few miles on the gravel tracks and found it had very light, balanced steering, especially at speed. It felt easy to ride which will pay dividends towards the tail end of the event when fatigue kicks in.

If all that fails I can use the GT Grade Carbon Ultegra that I tested before Christmas, a bike I know well and certainly delivers on the comfort front.

I did the Dirty Reiver last year, and to be honest, I was just happy to survive what turned out to be a really tough and demanding ride and the thought of doing it again never entered my head. Ticked that box, got the t-shirt, done and dusted and just a happy memory.

But somehow I’ve been talked into doing it again and I feel I’ve been swept along in a rush of excitement for gravel events this year. I’m easily talked into cycling adventures. As it slowly looms into view on the calendar, I’ll admit, I’m kinda looking forward to it. There’s nothing I’d really change about my approach last year, I got through reasonably unscathed with just one puncture but I know my feeding strategy wasn’t all that great, so that’s something I definitely need to address. And sorting a bike to ride it on as well.